Why Women Are Fucked In The Head

Your kids are now in school full-time. All of them.

It's time for your wife to go back to work. Even if it's just part-time.

You (a Man - if you're a pathetic sack of shit then you probably ain't reading this) are getting pissed off and thinking to yourself: What the fuck? What's wrong with you, cunt?

Here's what's wrong with her: She's fucked in the head.

To explain just how she's fucked in the head. Women have this childish desire to be taken care of. Which is natural for everyone at times - especially when you're sick, scared, and uncertain about the future. Then reality kicks in, you remind yourself that you're an adult, and you get back to fuckin' business.

Question: So why won't she get back to fuckin' business?

Answer: She's deliberately being lazy and turning herself into an infant. A dependent child. A useless ornament. A fuckin' parasite. Because she's allowed to.

Thank you for encouraging women to scream and whinge and cry like a 3yo when a man - anyone, actually - tells her that she can't have her fuckin' caaaandy. Or her 100th pair of motherfuckin' shoes. Or that motherfuckin' dress. Or whatever piece of useless motherfuckin' frippery that she'll use only once (maybe twice) and then put away to use next time she goes and visits Wendy and Tinkercunt in Never-Never-Land. 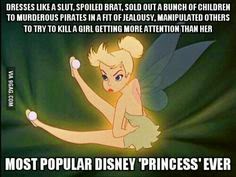 We useless Men should have beaten their asses black-and-blue years ago instead of tolerating or giving in to this bullshit treatment. Fucking pansies. Whenever I hear a bitching/nagging woman, my fists itch to put the cunt in her place. Spare the rod, spoil the child, these useless cunts are well-spoiled.

Now, more: if the silly bitch spent a bajillion fuckin' dollars getting an education (Bachelorette of Social Cuntism?) they've got shitloads of debt. Which dumbass you took on board when you married her. Then you got a second car. Then you got a house. Then you got kids. Then you upgraded her car to an SUV because it's "safer" (which is bullshit by itself). Then you put kids through school. Then through college.

So there you are you dumbass slave, knocking yourself out with long hours and working weekends for years and years - while this useless piece of shit woman is leeching off you and refusing to go back to work. Worse, the cunt is pissed off with you for no apparent reason and she is not interested in fucking you either. So you kill yourself for a parasite and her children (sure that they're all yours?) and she's giving you a hard time in the process.

Yeah, we know that 70% of divorces are instigated by women. What doesn't click is that most of the 28+% other divorces are instigated by men who have had e-fucking-nough of the motherfuckin' bullshit. Time to cut that parasite out of me, too bad for you kids, I'm'a outta here while I still have my sanity and before I deliberately kill someone to get out from under (murder or suicide can seem like a good option at times).

You kids are fucked up? Too bad. I'm already fucked up myself. Your shitty mom did it. Excuse me while I become a PUA and go pick up a few dozen sluts to fuck and get whatever random disease from. Who cares about your shit, I'm'a look after myself now.

The better part of this is that she's all cunty with you while she's going "no!" and stamping her foot in infantile tantrums. (Good excuse to turn her over your knee and blister that sloppy fat ass.) So why is she being all cunty and full of hate?

However! Because she is never to blame, it must be your fault you bastard man.

This is why women are fucked in the head.
Posted by Black Poison Soul at 14:34