Stockholm syndrome, or capture-bonding, is a psychological phenomenon in which hostages express empathy and sympathy and have positive feelings toward their captors, sometimes to the point of defending and identifying with them.

It strikes me that we men are also exhibiting a form of our own Stockholm Syndrome: we keep going back to our abusers (aka women who abuse us emotionally and use us for our money/effort/sweat - ie slavers - ie captors).

Unfortunately for them, the amount of abuse has gotten to the point where some of us men have reached the point of not blindly accepting women's help. Because we have to ask ourselves: are they women who genuinely want to help, or are they simply members of the herd jumping on the latest bandwagon in an effort to attract men back into captivity?

This whole thing of Women Against Feminism: it sounds like a crock of shit. You can proclaim whatever you want, yet I can still smell the nasty stench of feminism in what you say casually and how you act all the time. So I have to ask myself: What are you getting out of it, changing your mind like that? I mean, 40 years of expressed man-hate and then suddenly feminism is being rejected as bullshit? Why?

Oh, you might actually get a slave man of your own then.

I've seen tremendous amounts of female selfishness. Then you turn around, all mealy-mouthed and hypocritical, to say to me: "Don't be selfish!" It's breathtaking the chutzpah that you display. Though thinking about it: all muchness of a muchness with the predominant female entitlement mindset.

Fuck you. I'm going to be selfish as I want. It is my right.

For 40 years you've told us that we're unwanted. I can see it too, all the time, especially these days. I'm not wasting my time and effort, shoveling shit into a black hole while you have a whinge in my ear about everything. Fuck that noise.

We men have been saying: "What do women bring to the table? Nothing." This is actually wrong. The reality is, men have deliberately walked away from the table - crap like the so-called Anti-Feminist and Red Pill Women is just women trying to coax men back to the table with the promise of change. The herd as a whole is now jumping on the bandwagon in an effort to get their own men.

Abusers always make false promises about changing to bring their victims back to them. This is why we shouldn't believe. We've been ensnared by our captors for 150 years - ever since the divorce-laws changed from men getting everything by default to women getting everything by default. Finally, after 40 years of feminist-inspired overt abuse, we've actually realized - properly-internalized - that it's changed for the worse for us.

Now that we've realized this, now that we've started acting in our own best interests, it's shocking to some women.

Just because a woman is against feminism doesn't mean that she's pro-men. She still plans to use a man for her own ends: a paycheck, a home, kids, etc. Frivorce for cash and prizes are still 100% viable methods that she has available - and likely will continue to use.

We are finally starting to have an effect upon the "marriage" business of women. It's gone down the tubes, they can't get any commitment, this is why we have 49% of children born to single mommies.

Further, they are starting to get that worrying feeling that government is going down the tubes. That social safety-net is going away.

So they can't find a good maaaaan. Whine, whinge, bleat.

So they look at the complaints of men. PUA, MRA, MGTOW. "Hey, these guys dislike feminism. They blame feminism for all this. They say that they will not go out with feminists. They will only hate-fuck feminists. I know! I will disavow feminism! I'm a Woman Against Feminism!"

Preach it sister. Scream it loud and proud. 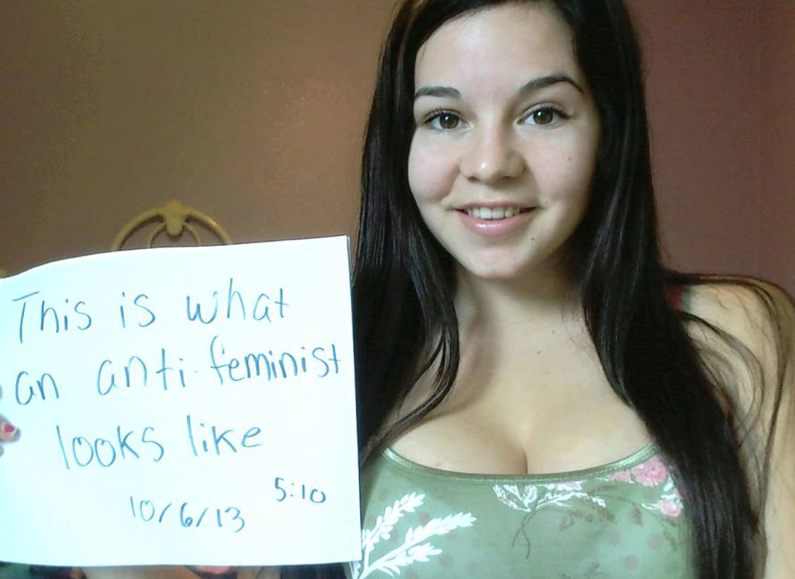 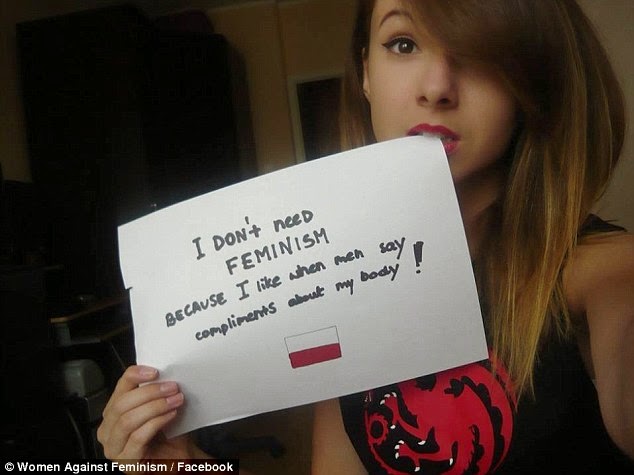 You can use those lips on me any day. 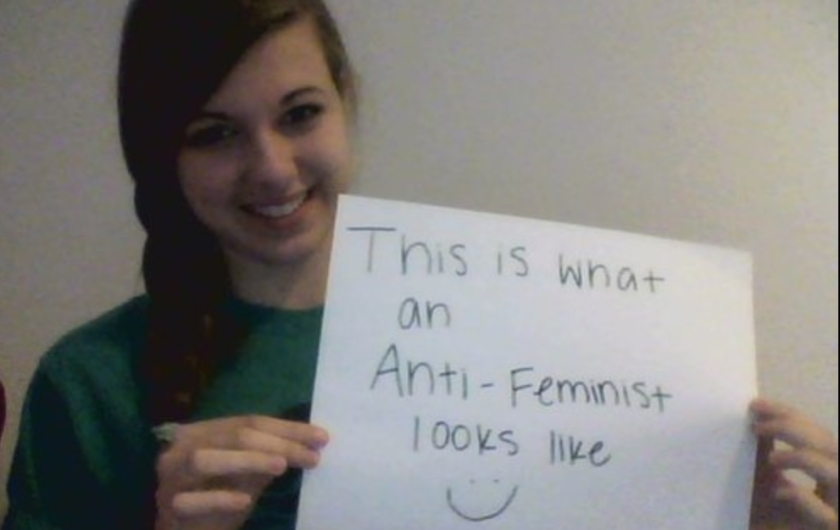 Easy to say when you're cute - feminists are mostly ugly. 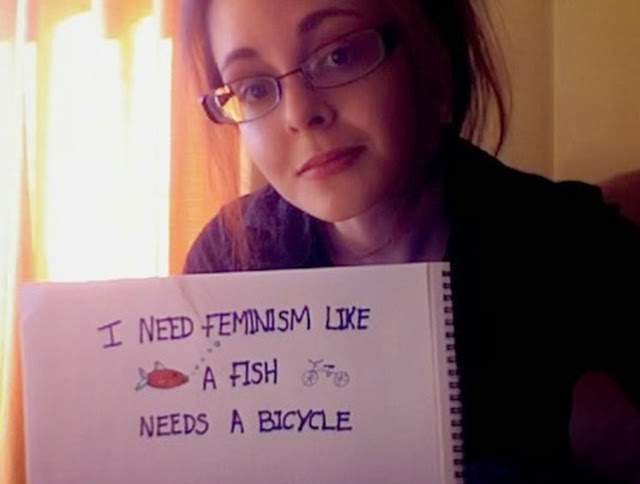 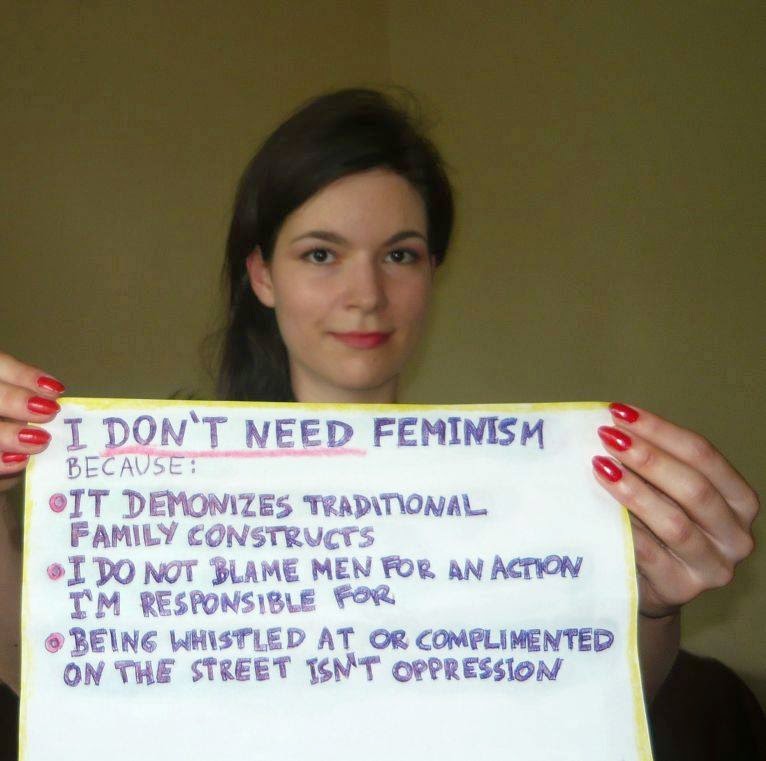 Nice nails - by the way, traditional family constructs were destroyed 150 years ago. You don't know what they are any more. 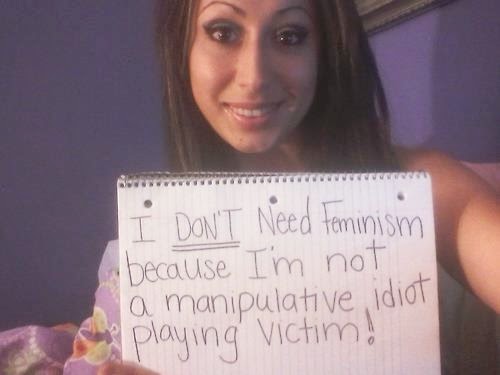 You sure about that. 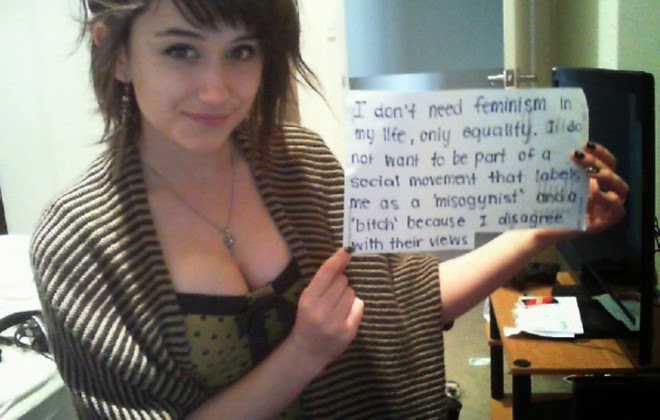 Equalism is the new feminism. Fail. 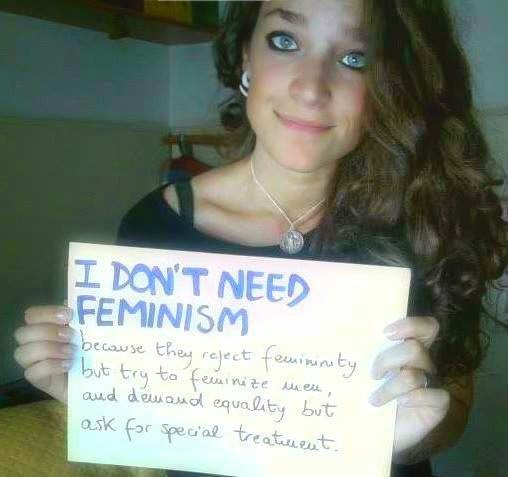 Tell me that when my fist is in your hair. 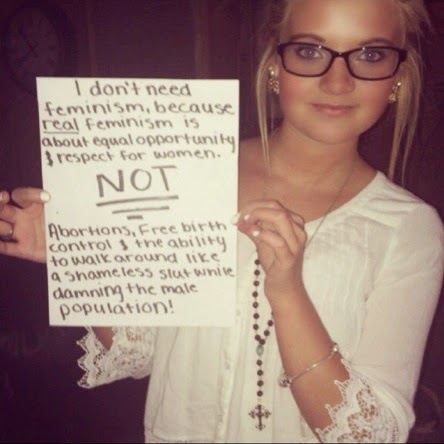 Feminism vs "real" feminism. Do you have split ends to go with splitting semantic hairs? Fail. 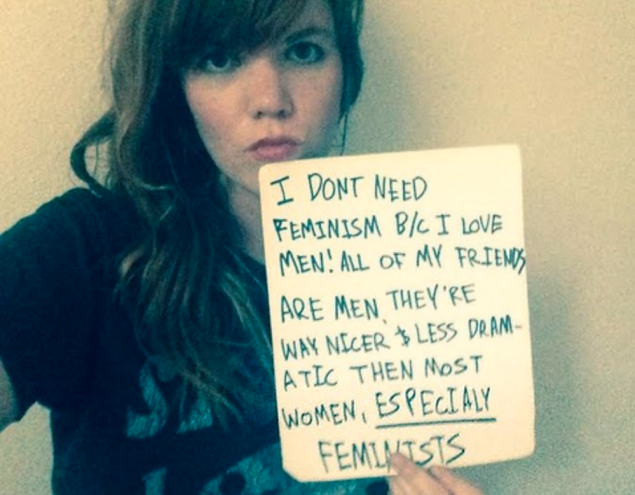 You love how many men?

If female nature has suddenly changed in the last year or two - what has changed it?

Nothing. So wake up!

It's not that these girls have changed any. Christ, just talk with them in an unguarded moment - or say one thing against their female prejudices - and you'll get an earful of the feminism and feminine imperative that they still don't realize they have deeply internalized. It's just that for these girls, their meal-ticket has walked away. And she's sitting at the table, trying to coax him back.

You women can say what you like. Us men aren't listening to what you say now, we haven't been for a while. (What, the 50% divorce statistic isn't a glaring clue as to your nature? Shame on you! Yes, yes, we know that you try to ignore and belittle that as being irrelevant.)

So there's not enough available men out there for the women to hunt down, entrap, and make pay for their promised life of ease.

You know what all the above signs (and women) are saying? "If you work for 7 days a week at a crappy job to support me, I will marry you and fuck you." How reassuring, there is a girl out there who wants you. So can you really believe this?

It's a fucking dating ad for women. This is just a bait-and-switch scheme, another manipulation of men. Good prank - predictable, though surprising that it happened this quick. Next, it'll be anti-feminism in movies with sickening men falling for it and marrying these women.

That solid eye-contact is saying: "Fuck me." And I would, because these girls are generally cute. Yet I would not believe for an instant that she was an exception to the general run of the mill woman of my experience. YAWALT. I would never commit to her. I would never marry her. Once you're fully in her slave-pen, you're done.

You see, no matter what the women are babbling incoherently saying - the understructure of our laws has not changed in the slightest. It's all still the same. Nothing has changed on a fundamental level. You will still be her slave. The only way to change it would be to roll all those laws about family back 200-500 years ago, then there will be a fundamental change and men will no longer automatically be the slave in the relationship.

Anti-Feminism. Red Pill Women. Just another crock of shit, another snow-job, more wool that women try to pull over a mans eyes in the process of enslaving him.