Okay, I decided that it was worth putting up this method that is popularly known as Hegel's Dialectic - with a kind of example. It's always good to review and refresh the stuff in my head as well.
Technically it goes in steps like this: thesis + antithesis = synthesis. Then you repeat, using the synthesis as the new thesis: thesis + antithesis = synthesis 2. And so on: thesis + antithesis = synthesis 3.
Now this don't mean a whole lot to the average Joe like me, so I had to try and translate it to make it more common sense. Academia, dry and obscure bastards at times. After some thought it came out like this: truth + lie = compromise. Compromise is the worst bit, because you then get caught up where they say that the compromise is really the "new truth" and repeat it. Ad nauseum.
So you go: truth + lie = half-truth. Half-truth + lie = quarter-truth. Quarter-truth + lie = eighth-truth. Eighth-truth + lie = sixteenth-truth. Etc.
Eventually you get to compromise-n/nth-truth and everything looks like it's been passed through a carnival's funhouse mirrors, sprung through a kaleidoscope, and you're wondering how the fuck you got into this situation.
Like when you look back at yourself before marriage and wonder how you changed step-by-step from a relatively strong guy into a spineless man who goes "yes dear" all the time. It's actually quite the wincer when you realise that it's happened to you. 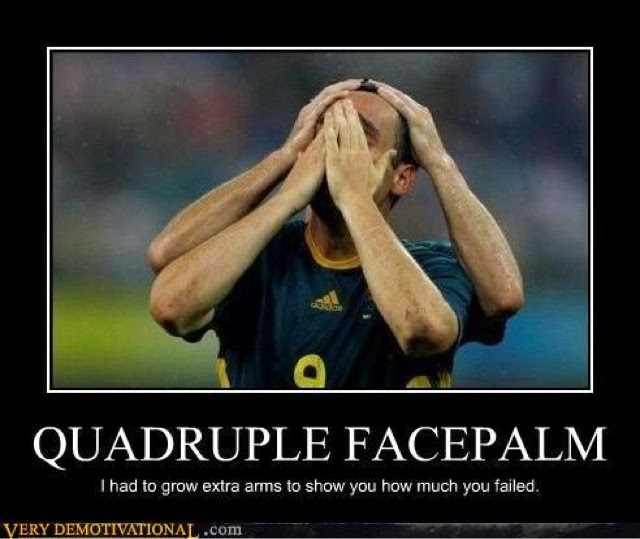 I had to grow extra arms to show how much I failed. I suppose that there's the consolation-prize of at least having had the opportunity to try and the balls to make a decent go of it. Even if it was ultimately futile and stupid.
Any rate, a real-world example of this. One that even feminists and women can understand (because they're in the process of doing it right now):
1 in 4 women are raped on college campuses
To (currently): 1 in 3 women are sexually assaulted on college campuses (note that it's sexual assault, not rape - this is designed to broaden the boundaries of what is rape yet again)
It will become: 1 in 2 women are assaulted on college campuses (all assaults, not just sexual assaults and rape - c whut they did thar)
Eventually it will become: all women are harassed on college campuses (where this is the equivalency of rape - harassment and assault and sexual assault and rape are all conflated, added together)
BUT! It will be translated to (in the common mind) as: ALL MEN ARE RAPISTS!
I wouldn't be surprised if they started banning men from college completely. It's too dangerous for these women to have men around. Higher learning will not be a bastion of progress - it will transform overwhelmingly, step by step, into a religion of feminist studies which suck the money out of women's and their parents pockets.
Men will be expected to marry these brainwashed women and pay off the remaining charges incurred by these women in their willing brainwashing. This even though these men are all rapists and cannot be allowed to be amongst these girls in college, they are still expected to man-up and marry those whores. Much of this is already happening.
The best part is that even the beginning statistic of 1 in 4 is already an outright and long-disproven lie. Even though disproven it's still a meme. Everybody accepts it, it's a given truth in the public mind.
At any rate, there you have your example of twisting reality to the point where it's nothing at all like the original truth: "some rapes occur on college campuses". Plus projecting it a few steps further into more frightening trends for the future.
You really think it won't happen? You still think there's no poison out there? You still think that we're not fucked?
Posted by Black Poison Soul at 11:16

Email ThisBlogThis!Share to TwitterShare to FacebookShare to Pinterest
Labels: #lies