All About Her Experiences

I love, love, love FaceCrap for all the attention-whoring that it reveals amongst my woman "intimates". A prime example has cropped crapped up in the last couple of days.

The Eagles are coming in concert to the Vector Arena in Auckland, sometime in March. Which is all cool and shit, 'cause I kinda like the eagles. I grew up with 'em.

Along comes this decent-looking 35+ self-entitled twat splurting out with: "I spent $2,200 to go see him in March!" 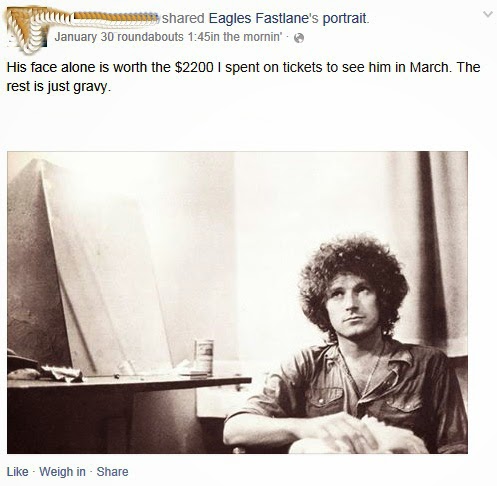 I'm raising my eyebrows - really, $2,200 to go see a live performance of The Eagles? What fucking crack have you been smoking? Some of her other male friends seem to be just as incredulous - one commenter asks if she got gold-plated seats and gets to keep them. Oh no - she bought tickets for herself, her mother, and her father. Over $700 apiece (platinum seats - gold, so passé).

Incredible daughter alert indeed! She's also dribbling about this being the 3rd time seeing them live. One of her (female) friends is dribbling about how it's worth every penny (note the female validation from the herd).

But wait - there's more! She's hoping that she can throw her bra to the stage from her seat.

A few more comments, then she decides: actually she's going to throw her undies! Just need to decide whether they should be clean or worn. Decisions, decisions...so hard...

Yes, like he's going to want to specially pick up your undies and sniff them. "Mmmmm that smells soooo good. Get that cunt up here, I'm gonna ream all her holes seven ways from Sunday."

The best part: I know this chick doesn't make this kind of money. Her hubby, however, makes some decent dough. Her slave-man just spent a couple weeks wages so his slut can take her mommy and daddy to a concert, throw her panties up on stage to the musician that she has the hots for, and (maybe) get some high-status/famous cock crammed into her cunt. At least, in her dreams.

Damn amusing, seeing such cautionary tales for all men coming up in social media. Not even hiding it. Silly, silly cunts.
Posted by Black Poison Soul at 09:35