I have been vaguely watching with great amusement the following hoo-rah. 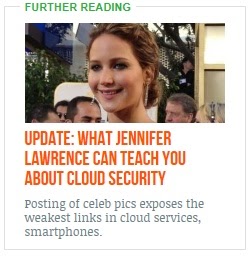 For those of us who have been too busy to notice: celeb Jennifer Lawrence (of Hunger Games fandom, the tweenage snuff-movie-series that has been causing so many female hearts to burst with their prideful throbbing) had her iCloud  account hacked and naked selfies slapped up on the interwebs. I have no idea how naked she was in said selfies, however they supposedly did the rounds pretty quick. Going by the furor they were probably reasonably racy.

At any rate, being in the tech-world I've seen umpteen articles and things about iPhone and iCloud security, hacking, how to prevent this, blah blah blah blah blah. None of which strikes at the real issue:

What the fuck was this stupid slut doing taking naked selfies for?

Who the fuck was this stupid slut sending these naked selfies to?

Why the fuck is this stupid slut being used to blame Apple for bad security?

Let's be brutally honest here. In the old days of film cameras, did you take naked selfies? Fuck no. If you did, you sent them to a very discreet service which charged you big bucks - and you were the type who didn't mind if some random unknown employee perved over those pictures of your naked bod. (AKA you were a fucking slut and it gave you a sexual charge to think that some unknown guy was jerking off to your pictures. Just like the girls who were in all the pages in Penthouse, Playboy, etc.)

So, to all the stupid pieces of shit who are trying to pull the Female Entitlement bullshit over our eyes and say "it's all Apple's fault!" and "where is her privacy!" and all that crap. Two words: Fuck off.

This is a stupid slut who was taking naked selfies and sending them to various guys who turn her on. The moment it goes out of her phone it's over the airwaves - into the open air for anyone to pick up. (I wonder if that'll become the new geek entertainment someday: instead of wardriving, picking up cellphone transmissions and reconstructing them into naked selfies for personal enjoyment.) The guys can then pass them on to whoever they want.

You want your privacy? Then don't be a stupid slut who takes naked selfies to send on to hawt guys!

This is a prime example of the female entitled mindset coupled with the male kiss-ass mindset. So sad that so many men are so pathetic that they have to try and protect sluts from themselves, or excuse sluts for their bad behavior. Especially bad when these dumb sluts are supposed to be our "role models" for youth.

Never mind, I'll just have another sip of Grand Marnier and watch these dumb cunts of both sexes run around in ever-decreasing circles. You gotta laugh.
Posted by Black Poison Soul at 10:04