Normally I talk about teh feministing wimminz, how festering orful they are, how messed up dur finking is, et-fucking-cetera.

Basically I'm willing to be reasonably pleasant to an online woman - because I'm generally a pleasant person anyways - until I smell one hint of the bullshit feminine privilege/mystique and similar fucking crap. Then the knife goes in, like I did to this privileged cunt prior: 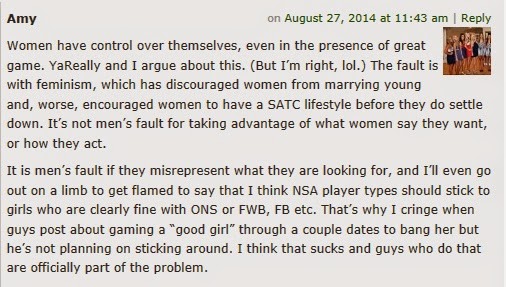 (If you can't see how this privileged cunt thinks she can walk into a male space and attempt to dictate how they should think like she wants: you need a pair of my patented Crap-Colored Glasses™. Only $2,500.00 the pair and cheap at the price - it'll save you from: heartache, mindfuck games, emotional blackmail, and accidentally putting a ring on a whore and losing half+ of your accumulated life's work. I know that you'll thank me for it.)

Now though, it's time to take that knife to my fellow-men.

I have seen far, far too much online pussy-kissing from Beta men who suckup to anyone who proclaims that they're a girl. Worse, this is happening in the manosphere - I'm seeing a lot of it over at the Chateau, to the point that I suspect Heartiste shakes his head and has a little chuckle whenever he sees it. These guys put the online pussy back up on the pedestal and lap up its runny shit, giving the whore her online pussy-card back.

These pathetic maggots haven't gotten the memo yet: Tits or GTFO.

Speak pleasantly? Sure. We're not all neanderthals - or maybe we fucking should be eh? Call every woman a cunt to her face no matter what the company eh?

As I said up there: one hint of bullshit and the knife goes straight in. Fuck that shit. No way am I gonna let some cunt think she can for a moment pull any bullshit over on me, online OR in person.

Especially not gonna take a steaming dump on my own dignity, online or in person. For the sake of "being nice" in my own fucking male space or shared fucking male space. So little fucking Princess can feel all safe and loved and fucking superior because I'm'a kowtowing to her just 'cause she says she has a cunt. Give her that little online ego-stroking that she craves like the narcissistic whore she has trained to be all her life.

That is frankly weird, especially given there ain't no way you're gonna have a chance of sticking your dick in it anyways: it's the internet and she's on the other side of the world. Plus "she" actually could be some guy or a massively ugly and fat chick for all you fucking know. Online, who the fuck can tell.

So you Beta maggot men, putting that online pussy-you'll-never-get-an-actual-sniff-of-up-on-a-pedestal and licking its runny shit up. Fucking stop it. You're fucking pathetic!
Posted by Black Poison Soul at 09:49