Seems that a Jamaican fambly got their knickers in a knot when their daughter only made 5th place in the Miss Universe beauty contest.

Dum(b)-dee-dum(b). Granddaddy not happy and starts whining, because his "proud, independent, unconventional daughter" didn't get to be number-one. Blames the judges for "not making it clear that long hair was a requirement".


The grandfather of the Jamaican beauty queen who lost out on the Miss Universe crown has hit out at the pageant judges for being unclear about the requirements needed to win the show.

Michael Fennell said that Kaci was the victim of ‘unwritten factors’ and that the judges should have stated if Miss Universe needed to have long hair.

He said: 'If short hair is a problem why didn’t they say so in the contest?'

It's called checking out the prior winners to see how they look - strangely, they all had long hair (whether put up or free and flowing). It's well-known that the contestants have long, pageant hair. So boo fucking hoo to you too, you and your family of manginas.

One thing really did draw my attention, though. Supposedly Miss Jamaica was a "favorite". Of who? The mangina crowd? I'm picking so, thus I'm very pleased that the judges based their decision on traditional models of beauty: long hair, big boobs, tight ass, long legs. This lot still have a functioning set of cock and balls.

Now though - I can see the furor coming. The feminasties will kick up a stink. "We dislike your decision! We don't like the way that you choose the winners of a beauty contest! We dislike that you didn't choose that strong, independent womyn! We think you should...!" 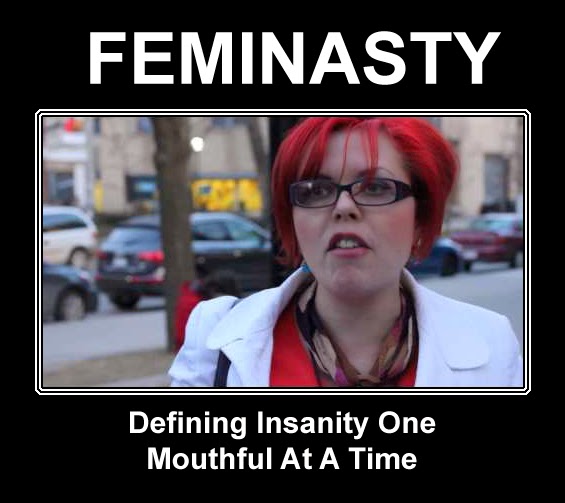 In the words of this well-known feminasty: "SHUT the FUCK up!"

Heheheh. We MEN know what stirs our boner, and it sure as fuck ain't the nasty, argumentative cunt-brigade like that'n. 'Cause they only wish they could turn us on.

In a lighter vein, I had a boner-stirring moment earlier this morning. Going down a rather large number of steps all sweaty in my singlet from a morning scenic walk. Passing me on the way up is a younger middle-eastern man and his very sultry girl - she was behind him. She took a long look at me as we passed and openly licked her lips.