From the MGTOW men over at /r/mgtow, one talks about how repulsed he is by hypergamy:

Everytime a woman has come onto me it has been for an obvious reason. One of the first expiriences with hypergamy was after I won my first race in high school track. 10 minutes after I win, this attractive girl who had previously all but ignored me suddenly out of the blue comes up to where I am sitting and sits next to me and starts talking to me for the first time.

I was turned off by how obvious her motives were. I knew our personalities were too different, but apparently, from my repeated expiriences with hypergamy, I have concluded that women aren't attracted to similar personalities, instead they are attracted to status.

I see it time and time again whenever a girl asks me where I work, and I tell her I am own a business, suddenly their eyes light up, and they start laughing and coming onto me.

It's always disgusted me when this happens. They are so predictable.

On the other hand, I am also not attracted to about 99% of women based on their personalities alone. They talk about trivial things, they laugh at stupid jokes, they aren't smart, and they always fall for guys based on predictable shit.

So part of my problem is that when a girl is attracted to me, 99% of the time, I know that our personalities are too different for it to even be worthwhile. I would basically have to pretend to be someone else in order to keep her interested, and that isn't worth it because I would feel like a fraud. A lot of pickup artist guys do this, they actually do pretend to be a different person, and it makes me cringe. Basically, they are whoring their emotions and pretending to like all the stupid shit that women like in order to get some pussy, but in my opinion, getting pussy without a real emotional connection isn't worth it. At that point you are basically whoring yourself and giving them the magical expirience that they fantasize about, while you just have to work to appeal to them so that you can maybe get your dick wet at some point.

What do you guys think of this? Does anyone else have these problems? And is there a way to overcome it?

The op's quandry is a real one, however he's not consciously aware of why he feels this aversion. So I will define so-called "hypergamy" in no uncertain terms for the first-and-last-time:


Hypergamy (adj.): The action of a parasite consciously choosing it's host. Said choosing is not final and can be re-chosen at any time that seems advantageous for the parasite in question. In extreme cases, multiple parasites can attempt to fasten themselves at the same time to a single host which appears to be of high value.

Therefore: "hypergamy" is a pretentious/highfalutin' word to describe the actions of a parasite consciously choosing its new host.

[Okay, so I suppose that hypergamy does bloody exist when looked at in that way, and good vs bad behavior, training, rigidly-enforced social norms, and etc can keep it under control. Shit and damnation. So now I'm gonna gripe and bitch about the word: Why the fuck did they invent a special word for it? We've had the concepts for centuries if not millennia. Is this because aca-fuckin'-demia decided to make it a word and put some papers together and label it as uncontrollable and ask for more $$$ to line their pockets? Is this part of the leftist/Marxist/Feminist social-manipulation to make men even more helpless? And did some pretentious twat in the manosphere grab it and run with it with the purpose of making more $$$ because they're on the so-called "cutting edge" of research? A lot more thinking is required on that one. - BPS]

So this is 100% greed/theft (both original sins) coupled with the "grass is greener" mentality. Which ties in very neatly with the books "The Predatory Female" and "The Manipulated Man" and others under the Worthwhile Books page/link.

So the op's aversion boils down to the natural aversion of someone noticing a bunch of fleas, lice, and ticks trying to fasten themselves to him with the purpose of sucking on his blood (or effort/life/time as the case may be).

He is extremely lucky that the attractive girl who suddenly started talking with him was so overt and unpracticed - he could have found himself in baby-jail as the unwilling host/slave of a parasite for 20+ years, then raped of the rest of his life via frivorce/etc. She was obviously unpolished and still learning her trade. What might have been going on in her mind? "Never mind the fuckup. There'll be another host/slave. They're all interchangeable."

Yes, women are attracted to status and money - because these are the signs of a worthwhile host.

There are some other notable comments in the thread:


Sure, being attracted to success, "good genes" etc. is kinda natural and to be expected. But women are completely over the top about this. If you physically and mentally cannot be satisfied by something slightly less than perfect, if you cannot be happy with someone who is not vastly superior to yourself, if mass murderers are attractive to you, then you're a nothing but a fucking animal.

And not only is this crap tolerated, it's encouraged in modern society. We give women moral approval to shamelessly pursue Alpha cock and Beta provision AND deal with the collateral damage collectively.

Thousands of years ago, people already figured out that letting hypergamy run rampant is NOT compatible with civilization. We now see the result of doing just that: disenfranchised beta males, perpetually unhappy women engaging in self-destructing behavior and thugs ("Alphas") freely reproducing which causes the upbringing of violent and damaged children (thug genes + single mother = desaster).

I can't remember where I read it, however it was along the lines of the change in mores of society in the past hundred years or so. In the old days younger people looked up to and paid heed to their elders - because of the sheer experience they had accumulated.

Then advertising came along and this mentality was deliberately flipped - youth became celebrated. Because the young can be coaxed into doing stupid things, like buying crap they don't need and going on travel "experiences" that they will not remember because they're too quick and whirlwind, and putting down no money on 30-year ARM/interest-only loans for houses which are stupidly fuckin' expensive.

Youth became the easy-ass host for the economic parasites of our waning civilization. Even those baby-mommas are in a quasi-parasitic-symbiotic relationship with our parasitic government, sucking the effort/life/time out of the worker-men of society.

Here is one more quote that I consider very relevant:

This is no more or less shallow than women's hypergamy. Men are expendable, woman are perishable.

The good news is that you can climb up the wall, while a woman can't. Plus, if you do so you can get more than your fair share of women.

My problem with hypergamy is only that's it's unrestrained. If women wouldn't get babies with Chad and have tax money pay for it and betas wouldn't wife up sloots, hypergamy is fine.

The commentor correctly notes that men can climb up the wall while women cannot, and shows neatly that women look for "high-climbers" to parasitize off. The only way she can climb that wall is to leech on to either:

a) a man in the process of doing it (thus slowing him down, perhaps stopping his climb permanently or causing him to fall)

b) a man who has already done it (which won't slow him down at all, plus she doesn't have to experience any of the trials/tribulations/pain that he had to experience during the climb)

The latter is, of course, the prime goal for any young and good-looking piece of fluff arm-candy. 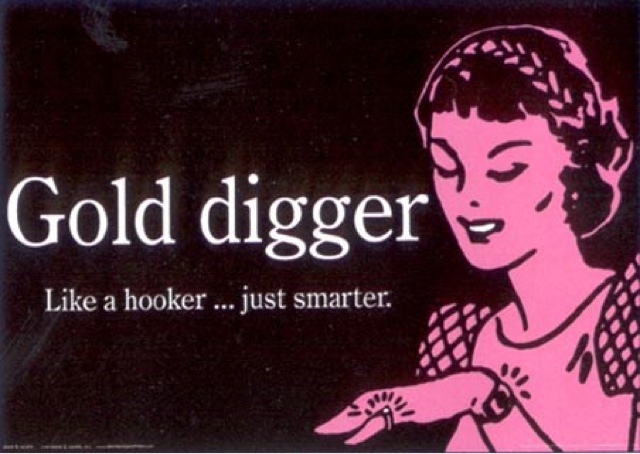 This commentor makes what I consider to be one major mistake in his thinking: he considers hypergamy/parasitism to be unrestrained. In my opinion he is 100% wrong with that thinking.

Parasitism is lauded and actively encouraged in our matriarchical woman-centric society. Just ask most long-term married men and the victims of frivorce and the children who have been weaponized by mommy so she can use them to beat daddy over the head for child-support.

Brought to you by Crap Colored Glasses™, only $1k the pair and cheap at 10x the price.
Posted by Black Poison Soul at 09:05