Interchangeable Will Eat Your Lunch

Let us go into fantasy-land for a bit here.

Let's say that you're employed by an awesome business. They actually do have an ethic where their employees are not interchangeable, they are valued, they are trained properly, the highest quality of service or workmanship is job one, et-fucking-cetera.

You see, there's always some fucktard out there who is willing to do it for less. They're that desperate for the work, for the money, that they'll cut corners and do a cheap job.

Your employer can't match that undercutting.

The customer loves it. He'll happily take a poor quality job, so long as he saves a boatload at the beginning. Because he doesn't click to the following:

It's that the effects of poor quality come to light long afterwards. It gets you through for a while - and then it bites your ass. The time between is just long enough that the general dumbass out there can't connect the dots. Especially the beancounters.

Meantime, the business which once employed you has long gone.

I've seen some strange things in life. Stuff that's made me think: "Don't you have a fucking brain?" To the point where I must believe that management and employees have a weird relationship. Like the old military toast: "Here's to inferior superiors and inferior inferiors. The stuff armies are made of."

Stuff like a beancounter actively saying that there's no profit to be made in X, then breathlessly states that "we should get into as much X as possible". Hello? The person the beancounter was rabbiting on with at the time made the commonsense observation: "If there's no money in it, why are we doing it?" The beancounter couldn't think of anything to say to that...

Then you get the sensible people, the rare ones who proactively think about this shit.

A small example: I've been doing a woodworking project, one which I want to bolt together (as well as nail) for extra strength. So some 24x 10mm galvanized cup-head bolts, 170mm long, are in order (actually 160mm but they're popular, they didn't have enough, so I was forced to go for the 170mm - just-in-time supply in action).

While working this out I realized: I also have to drill 24x 11mm holes through 150mm (6 inches) of solid tanalized wood. The problem is that most drill-bits aren't that long. I sure as shit didn't have any. So I head in to the local building shop looking for some bits, and the only ones I can find are auger bits that look like this: 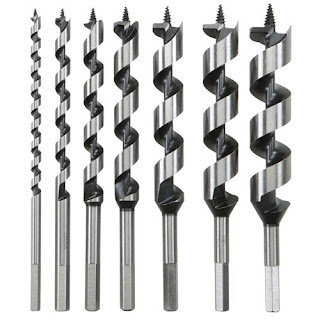 Which is all well and good. There's the cheapass bits, and the expensive bits. Being a thinker, I go for the $29 one because:

Now, most fucktards will go for the cheap ones. Because most people are cheap bastards and only thinking of the immediate job, not 10+ years down the line. Plus they'll ram it into an electric drill and try to use it at high speed - which will likely fuck the job up, maybe even break the bit and cause themselves an injury.

(Power tools are awesome. You can fuck the job up in half the time.)

Being a half-smart fucktard I decided to use the correct piece of equipment for the job: 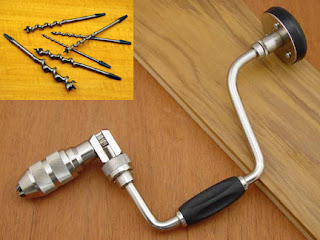 Yes, it takes time. No, it doesn't take a lot of effort. And yes, I still made a few crooked holes. Inexperience. Never mind. My woodworking project should last the next 10+ years, easily.

Unfortunately, you can have middling-high quality in what you do. The poorest quality job, done by a bunch of clueless interchangeable knobs, will beat you out of the work just about every time. (I say "just about" because there are a few people who have a clue and recognize that high quality is better in the long run.)

In New Zealand terms, it's the difference between:
By which point the bloody jackleg builder has long ago closed his business down, only to open up another one under a new trading name. Want to bet that the quality of building done is any better than the shit that's already falling apart?

I wish I could shake the hand of the tradesman who put my house together. It's 50 years on, a little maintenance (new longline iron roof), a little bit of upgrading (air conditioning), and still going strong. Built like a brick shithouse, in a time when the idea was that it would stay in the family for generations.

So I live in a 50-year-old house with brick exterior and original matai wood floors that have been sanded and polished (that's a native New Zealand wood, fucking beautiful). While my parents live in a semi-modern 1985 house with fibrolite exterior and wool carpet with disintegrating rubber underlay, laid over fucking particle board - which is so soft and rots so easily that you could just about piss a hole through it. 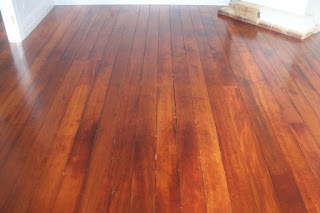 Except when you're blind, dumb, and stupid.
Posted by Black Poison Soul at 23:35