To preface: I've known several people who state that New Zealand appears to be a "social experiment". If it happens here socially, the rest of the world is about 10 years behind on shit that is going to happen.

Got that? Keep it firmly in mind. You'll click to why by the end.

In my last post about Fleas, Lice and Ticks, I stated this:


This commentor makes what I consider to be one major mistake in his thinking: he considers hypergamy/parasitism to be unrestrained. In my opinion he is 100% wrong with that thinking.

Parasitism is lauded and actively encouraged in our matriarchical woman-centric society. Just ask most long-term married men and the victims of frivorce and the children who have been weaponized by mommy so she can use them to beat daddy over the head for child-support.

Which by itself probably makes any feminist/leftist cunt squirm - right before they launch a screaming tirade of filth about what a woman-hating misogynist fucking pig that I am. And then start calling for my death.

Plus, I've written quite a bit about what fucking worthless pieces of shit single mommies are, et-fucking-cetera. Cue more ranting, screaming, dribbling and frothing hatred.

Which indicates to me that I've stuck the knife in real deep and twisted it in such a manner that it hits their personal weaknesses.

This is where our matriarchal, female-centered, gynocentric society goes outright fucking crazy-insane.

Let's begin with this image snapped from Twatter: 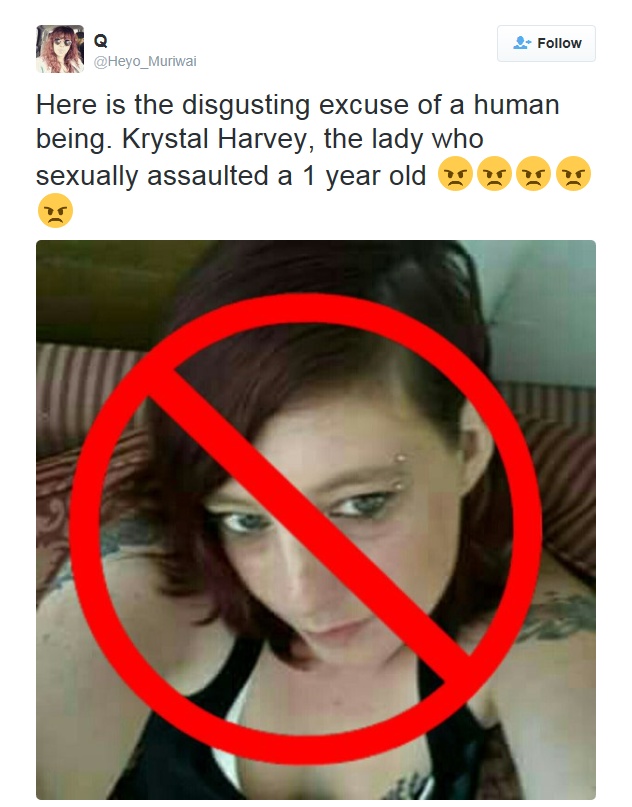 Revolting as it seems, this is actually true. Krystal Harvey of Waiuku sexually assaulted a 1 year old child.

4/ She filmed it for a minute or so

6/ When the pedophile got caught, she was found out

9/ She attempted to get name-suppression - which thankfully failed!

You can read some more of the sordid story on the NZ Herald: No jail term for child abuser (just released on the 25th of January, 2016).

You can also read: Woman sentenced for abusing baby and selling footage (which states that apparently she knew that the pedophile would publish the movie up online). She will also be monitored for 20 months - from this link:


Her lawyer Annabel Maxwell-Scott told RNZ that meant Harvey would have to return to court every three months and she would be in the system longer than if she had been jailed.

Which tells us that a woman raping a baby would get less than 2.5 years in jail (28 months) - IF SHE WERE ACTUALLY JAILED.

There's a whole lot of other mealy-mouthed blather in the both of those links (reportedly from the fucking COURTS) which makes me very angry. It's probably a good thing that I live in the North Island, else I might be tempted to join the chorus who are making threats against her.

Also according to her lawyer:


But Harvey was a "naive and vulnerable young woman", she said, who had had "an extremely difficult upbringing".

This makes me wonder if all women should be locked away. Partly for their own protection. Mostly for the protection of society as a whole.

One last thing to note:
Think about that little social construct, coming to the society where you live, sometime in the next 10 years.
Posted by Black Poison Soul at 19:01