So Gays Can Marry Legally in the USA

I suppose that I should be bothered by this. You know what? I'm not.

I guess because in my opinion it's just one more indignity piled upon a once-respectable institution. At least, I used to think it was respectable. The old-old-original version was. (Is that some hint of blue pill nostalgia I detect in myself? But then, I already figured out what marriage was really for anyway.)

I've made no secret that I think Marriage 2.0+ is just about as destructive to society as it's possible to get. Some 52+% of American marriages end in divorce - according to the CDC's own statistics from 2011. Not explicitly stated, yet there if you do a little basic mathematics. That's on the low end, not all states reported statistics that year.

So people are going "whoo whoo whoo! gays can now marry!" all over FaceCrap. Gay pride picture profiles. Even the White House picture has the gay-rainbow-pride-thing going. Are these people gay? Meh. Sheep following the herd. (That's my cynicism coming out.)

In reality, the LGBTQBDSM-whatever crowd aren't going to breed. In a hundred years time they'll just be a footnote in history, annotated with: "Insane how people catered to these evolutionary dead-ends". The lefties of the future will either have to deliberately manufacture more LGBTQBDSM-whatevers through more warped social engineering, or find some new minority to hold up as an example of "the poor poor dears, let's give them a helping-hand" so they can feel good and virtuous about one thing in their vapid and empty lives.

(Don't laugh about the warped social engineering. I've stated here that it looks like they're doing their damnedest to pathologize any form of normal Male-Male bonding. They appear to be stating that all forms of Male-Male bonding are supposedly homosexual at their root, thus demonizing it, while at the same time celebrating everything LGBTQBDSM-whatever. That's warped social engineering - and thinking! - enough to put this lot into the loony-brigade in a heartbeat.)

Yet still, I don't really feel that bothered by this legalization of LGBTQBDSM-whatever marriage. It was inevitable. In a strange way I feel that it's a good thing. Because this mocks the institution of marriage even more.

This mocking makes people wake up more to the social illness going on. To how destructive Marriage 2.0+ is. To the individual and to society as a whole. Etc etc etc ad nauseum.

More unmarried modern whores will be crying alone at the end of their lives. "Why can't I find a good maaaan?" Funny you should ask that...

This brouhaha makes me feel sorry for the people who have genuinely good heterosexual marriages and pride themselves on that. Yes, there are a few out there. Good on you. There are some NAWALTs, as we put it in the Manosphere - snapped up and taken off the market when young. These are married to what I consider the true Alpha's and Beta's, as per BoneCrkr's definition.

I hope that it doesn't gall you too much that the mentally-fucked-up managed to get the "right" to non-breed-but-fake-it. Civil union and de-facto relationships were not enough for them - they wanted the whole enchilada. They agitated. They got it.

The rest of us...those of us who chose poorly, who still have the option of choosing wisely again...we're stuck trying to find gold, in a toxic pool of far-less-than-ideal-women. That's those who really want to try again. Many of us got our frivorce already, others realize that theirs' is ahead of them and coming on fast. Some of us won't be going down that Marriage 2.0+ path again, or any time soon, for various reasons.

I do wonder if the LGBTQBDSM-whatever brigade have a clue as to what they've really let themselves in for. Studies show that breakups are even more common in their sector of society, moreso in the situation of lesbian relationships.

Which brings up a superficially-amusing thought: in the case of frivorce, which one is the woman who gets alimony from her partner?
===============================
In the end, what bothers me more in this world is this (unashamedly stolen from Return of Kings, commenting about social media): 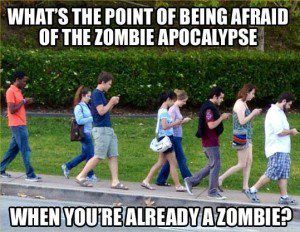 I wonder how many of these zombies will breed?
Posted by Black Poison Soul at 14:36