Why I Love PostSecret

This should be every man's little pleasure - to look up PostSecret every Sunday/Monday and tiptoe breathless through the revealed treasures of the female mind. (Okay, enough fucking Purple Prose. Back to normal programming.)

Gentlemen, here is Exhibit A: 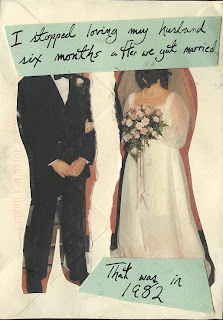 This kind of occurrence/thinking is prevalent. I know that you're gonna find it hard to credit - yet it's true. Stupid and true.

Example from last night, I was out having some beers with a couple of friends. One of the girls I was with had a couple more females show up: a couple of ugly and overweight landwhales, to be very charitable. Eventually the subject turned to men and dating, and how men these days only want sex. And how NZDating (a dating site, duh!) is only filled with losers who want them only for sex.

If you've got that, we'll do a lot for you. If you have a loving, wonderful, feminine personality to go with it, we'll move the fucking earth for you.

Not old, fat, whining goddamned landwhales. Of course all you're finding on NZDating is losers wanting you for sex. You fucking landwhales are only going to attract losers because winners are fucking proper women, not fat pigs. You look like the dregs, so you attract the dregs.

One of these fucking landwhales also had a whinge that she'd been married for thirty years, gotten divorced because she'd never actually loved her husband (even from the day she married him) and that she wished that she'd divorced him twenty years ago. Now it's too late for her. Which fits in well with the PostSecret thing up there, don't it.

Jesus, the hamsterbation was surreal to behold.

Girls, yes, men only want you for sex. Why? Because you trained us to be that way!

While you were young, you fucked around having your fun instead of getting serious about marriage and settling down and having children. Men (who got the sex) became used to that: women only wanting sex. Men (who got no sex) became bitter: and eventually checked out.

Now you want to settle down - and all you can find is the guys who want sex. The rest are gone, checked out long ago. As you sow, so shall you reap. The schadenfreude is delicious, as are your bitter tears.

That said, I got the number of a rather cute middle-aged woman very simply: "Here, put your number in my phone." She herself had been having a bitch about men only wanting sex. We talked. She has medium hair, reasonable tits, and nice legs. Ass is probably decent, will see once I get her naked.

Mental note: to fuck, soon. I'm going to give her what she wants: sex.

I will enjoy squeezing a few more of the drops of black poison from her soul.
Posted by Black Poison Soul at 09:18