Hold on tight, the grinch before Christmas has arrived...I'm gonna piss off a whole bunch of leftists, SJWs, wimminz, feminists, and assorted cunts (of both sexes) with this one! Let the pain begin.

Over the past couple months I've been slowly digesting Curse of the High IQ by Aaron Clarey. (The link is from Aaron's blog and is his affiliate link - I make no money from his books.) Get it. It's worth it. Especially from the "let me explain why your intelligent-ass-highly-successful-life and most of the people around you are both aggravating and frustrating" point of view, a real eye-opener there.

I very much enjoyed that part. In a way, it scratched an "itch" that I didn't know I had. "Like a splinter in your mind, driving you mad."
I particularly like that Aaron corrects a misapprehension that I had: that women are on the whole stupider than men and have a narrower IQ range. Not true, despite our prejudices in the manosphere. Women have exactly the same IQ range and distribution as men. (I went looking through some of the literature to double-check. Yep. Go looking for yourself, it'll be good mental exercise.)

What causes the noticeable difference at the high end of the scale is that men have a very slightly higher median IQ than women - about 1%, which is minuscule. That's a 100 vs 101 IQ. A drop of water in a tablespoon, kind of difference.

What makes it noticeable as a dearth of smart chicks (apart from those who are willfully fuckin' stupid and socially rewarded for being that way) is that once you get to that long tail out the right, there are noticeably fewer women in comparison. Like, twice as many men who are smart vs women who are smart. It's because the curve on the bell-chart flattens out real fast out at that point, so the difference really becomes noticeable.

Which in my opinion means that most smart women these days are going to be at least as much of an entitled cunt as the ordinary brain-dead twat in the bars, because she's "in demand" with the really smart guys. So she can just be a fuckin' cunt, who cares, all men are disposable.

(I have a friend in this situation. He's in IT, she's in IT. She divorced her first hubby, she has two children (one of whom is 16 and just popped out a baby, whooopsie! fuckin' dumbass). She pulled the pin on the fat-grenade a long time ago. She has multicolored purple hair. She has openly stated in front of him that she should divorce him and get half of everything.

Recently she's gotten her stomach stapled so that she can lose she's forced to lose weight. Dear me, danger sign, who's she looking to jump-ship to? (With cash and prizes.)

He tolerates this shit behavior because: 1/ he's clueless, 2/ she's intelligent. Or smarter'n him, at any rate.

It's gonna suck watching this go down. 'Cause I quite like the guy - he's very chilled and laid-back, just blind to the shit that women pull.)

Back to the subject, it struck me that the classic bell-curve indicates what might be called the "frustration factor" that the intelligent suffer from when it comes to civilization and society: 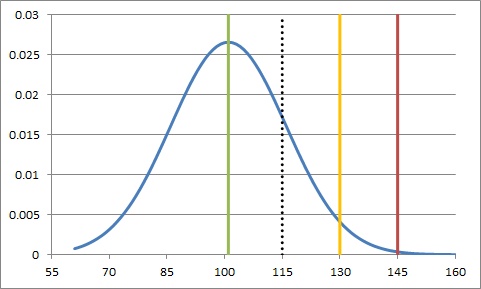 The 101 IQ green line is "normal" intelligence. The black dotted line at 115 IQ is the topside of "ordinary" people's thinking - about 84% of people are at this level or lower.

The orange line at 130 IQ is about where people start getting a real clue about society and what really makes things work and the like. The red line (redline, danger-zone!) at 145 IQ is where the definitely smarter groups of people hopefully get it together-enough to start reflecting on society, civilization, democrazy (that's deliberate spelling, for our crazy method of societal control), and all the other bullshit going on.

The frustration-factor is where the 130+ IQ (especially the 145+ IQ redline people) are looking back and thinking that everything which falls below the black dotted line is in control and making stupid decisions. Maybe that's about where we should start doin' the fuckin' culling...

Then it really hit. The bell-curve is not actually what you would call "normal" in an idiocracy, because stupid people breed and the idiocracy encourages them to breed more. (Fuck, just look around at all the single mommies! In fact, any woman - a 161 IQ and she still has a whoopsie? "It just happened?" Bullshit!)

This causes one helluva bulge out the left-hand side of the curve.

With some thought (no chance of me getting real data and examining it - no skill for that either) I realized that "The Long Tail" was actually a good indicator of what the real IQ curve should look like, somewhat more like this: 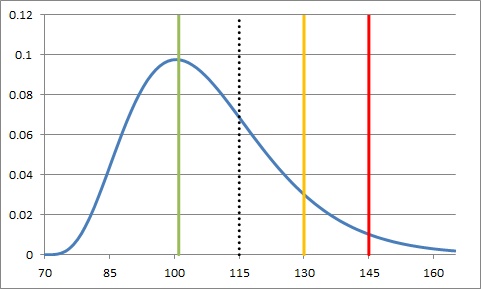 This is probably a more accurate rendition of reality.

(Think about it, too. Isn't that graph just a wee bit un-PC and liable to cause screeching from the retarded, if you make it bulge off to the left from the "normal" point? I wouldn't be surprised if the researchers experienced some very deep soul-searching and then "normalized" it to go for the less-inflammatory and much nicer smooth curve. Can't really blame them - poor bastards need to eat and feed their families.)

Note that the 115 IQ dotted black line of "culling" is about in the middle of things, where what is formerly considered "normal" is off to the left. This is simply because stupid people breed, they breed faster than the smart people, they are supported in their breeding by forced theft from the smart people, and the smart people have had the nouse to look around them - see the bullshit going on - and decided to nope the fuck out of it.

For this reason, the 145 IQ area is a bit higher in this graph than in reality. The smart people have wised up to the bullshit and aren't breeding - cannot bring themselves to breed - that much. Because who wants to bring children into what is rapidly degenerating into a third-world shithole...

The snowball of stupidity accumulates on the left. When it accumulates enough of an overhang/bulge we have an avalanche of bullshit and insanity which destroys everything in the way. Just like the things going on right now.

This lot is of course hypothetical and theoretical. It's something to think about. For the statisticians who come across this, the function used to make this graph is based on a Chi-Square Distribution.

For teh wimminz, SJWs, leftists, cunts of both sexes, and general retards who come across this post and start screaming about misogyny, hatethought, crimethink, incitement to murder and genocide, et-fucking-cetera: FUCKING OATH! STARTING WITH YOU BRAINLESS CUNTS! Now go fuck yourselves, you clueless fucking retards.

Or more likely, go back to being the hub in the Richard Salad. Man, woman or whichever of the whacked-out 72 genders you identify as, it's all you're good for.

This bleakly semi-humorous look at "intelligence" in the process of becoming "idiocracy" and wrecking civilization in the process is brought to you by Crap Colored Glasses™, only $1k the pair and cheap at 10x the price.

But grab Aaron's book. It's a lot cheaper and very much worth it.
Posted by Black Poison Soul at 22:29