It's come to that point again, where I feel that I have little to say.

I "talk" more on this blog than I do in real life. Far more. Unless I'm around people (usually at work) the most that I might say is "ouch".

Here the blather comes out, articulate, inarticulate, shallow as a puddle, deep as I can bear to look down the sewer-hole at any particular point in time. Narrowly focused, as per this blog and the manosphere as a whole.

It must make me seem one-dimensional.

People I have known - run across - in my life come to mind. Not just women. Men. Boys. People who killed themselves. People with premonitions of their own death. People who lived in a bubble where nothing nasty seemed to happen to them.

Abusers. Rapists. The vicious and violent. Funny, school had worse teachers than many of the so-called criminal types that I grew up with. The Holy Roman Catholic Priest who had his sexual fun with the little boys of his parish. Thank goodness that I was an ugly kid.

Ex-wife. Dancers. Sluts. Girls down for a good time, not a long time. Mouthing off with their bullshit for forever and a day. Entertaining prattle, pretentious prating.

On the whole, most people have not been that uplifting. Some people are very interesting - most bland, boring, dull, empty. My most interesting recent person - an old man who belongs to the New Zealand Black Powder Club. They own and shoot black-powder weapons: flintlocks, percussion, etc. He has old shotguns, Kentucky rifles, that sort of thing. Even casts his own bullets, seen here in my hand. 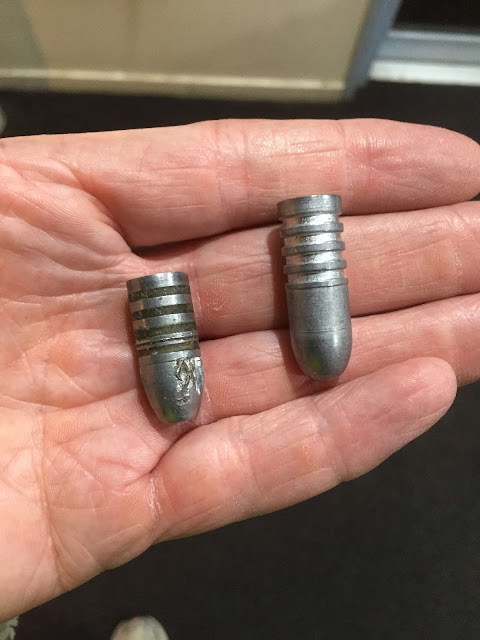 The small one is 405 grains, the large one 500 grains. The small one is munted because he was testing it for depth inside a shell and couldn't get it the hell out - it took pliers. These are pure lead. Lead buckshot, don't go over 900 fps or the stuff tends to melt into a blob. Interesting stuff.

The beach. Nature. Lazing on the grass in the sunlight. Playing in the bamboo and toitoi. Hiking. Fireplace and Grand Marnier in winter. Wildlife. Birds, deer, goats, possums. Hunting. Caves. Abandoned places. Peculiar stones and rocks, pieces of greenstone, finding an old maori adze head as a child. Looking out over miles of bush or beach or sea.

On the whole, places and nature have always been far more uplifting to me. More relaxing. Don't have to watch myself - always something that the socially clueless like myself have to be careful of. Though Game has helped that in some ways.

Being beaten with a chunk of firewood. Still have faint scars on the forehead. Said that I was pleasantly ugly at best. Broken leg. Nearly run over by a Land Rover at night, the idiot didn't have his lights on. Pushing a bike one-handed for almost 5km, to get to a doctor, while the other arm has a shattered elbow.

Climbing various peaks. Taking photographs of the night sky. Watching  a lunar eclipse through binoculars. Checking out the Venus/Jupiter conjunction not so long ago.

Walking through cities where I don't speak much of the local language. Looking at the architecture, ancient, modern, marvelling at how much some people of the past have done, puzzling at why people these days are so obsessed with silliness and triteness.

Two thousand years ago we could have had the steam-engine. We had gears, and batteries, and stuff like that. These things weren't rediscovered until the last few hundred years. Only 47 years ago we went to the moon. The moon!

Now we bitch when the fuckin' remote needs the batteries changed. Now we have fights about what we should watch on TV or at the movies or where to eat out. Now we listen to the blather of the inane "celebrities" and the carefully-sanitized news. Now we argue about what the dramatized idiots on the tv-shows do, what they should have done, etc etc ad fucking nauseum.

Thank you very much for the drivel, world.

It's time for Monk Mode again. Hopefully there won't be anything to kick me out of it. Might avoid the manosphere entirely for a month or two, avoid that silliness going down, while I sort out work and business and get some thinking in. Will ease into it.

ISTJ's, probably introverts on the whole. We do our thinkin' in advance when we can. Figure out our boundaries. Figure out what we are gonna do in certain situations. Run through scenarios in our heads. Unlike that dipshit extroverted world, where most things are a stream-of-conscious random blurt of silliness and stupidity.

A scary thing for women, Monk Mode. Who knows what kind of thoughts and actions might come out of it. After all, someone might realize "nah" and go do their own thing. Scary, scary, for her to be relegated to the dustheap of generic worthless shit in this world.

Putting aside the Crap Colored Glasses™ for a while. Later.
Posted by Black Poison Soul at 09:34

Email ThisBlogThis!Share to TwitterShare to FacebookShare to Pinterest
Labels: #MGTOW