Proven by science to be false for the last 17-18 years. 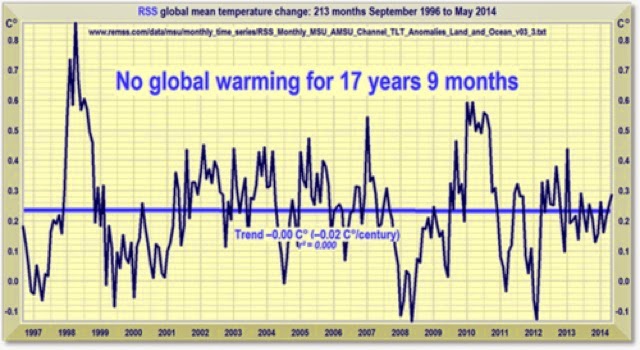 And here's some more graphs, mapped from data collected by the RSS satellite, showing vs the ICC's projected data.

I would say that the "debate" over climate change is over - but religions don't die that easily, nor do religious fanatics just fade away. We can all expect to continue to pay out the ringhole for this bullshit, while the second- and third-worlds get beaten over the head for "not doing their part" etc ad nauseum.

Poor bastards, being leeched off for the gain of others. What a stinking and poisonous society we live in.
======edit======
Okay I've done a little looking around and etc regarding climate change. It is rather difficult to easily find information which hasn't already been fucked around to prove somebody's point of view. So, I had to look at things from a slightly longer and larger viewpoint:

The above pic is taken from the Wolfram|Alpha knowledge engine and shows the longest, median, and shortest Ice Ages. Note that we are currently in the Quarternary Ice Age. Yep, it's an interglacial period between huge sheets of ice potentially covering the entire goddamn planet. Only 2.5 million years in, probably another 72.5 million years to go, maybe 297.5 million years if we get a bad roll of whatever cosmic dice cause Ice Ages.
Now logically, between these damn ice ages there were far warmer periods over the entire planet. Like the times when the South Pole was so warm that there were dinosaurs living there. I shit you not, reptiles living in a place that is now under i-cant-be-arsed-finding-out-how-many kilometres of ice and snow. Look it up yourself if you give a damn.

Now this is from Wikipedia and shows the last 5 million years of temperature drops. About 6C less on average than 5 million years ago, and varying in a 100-thousand year cycle from about 2C less than the average, to about 9C less than the average. The 2C "warmer" part about being right for an interglacial period.
Strangely enough, the warmer period between about 1,000-1,200 AD did not drown the world under hundreds of meters of water. Even though the Vikings were able to run sheep and cattle on the open grassy fields of southern Greenland (good luck trying that shit now, the brass monkeys are on strike). Similarly the ice-sheets didn't scour every speck of life from the planet, nor did the 5 million year ago hotspot drown every speck of life on the planet.
So from what I can tell, we don't know enough to make any sensible predictions stating that humanity is or isn't causing Global Warming. It seems vanishingly unlikely. What I do grasp is that Carbon Credits and suchlike are bullshit because they don't actually stop the burning of fossil fuels and the like: they just let what I will call the "ethically challenged" to salve their conscience by spending a little more money for the enrichment of others.
If people want to stop emitting carbon, just in case it is causing Global Warming, then don't waste your money on Carbon Credits and similar shit. Instead invest in something like Thorium Reactor technology with Bill Gates, or let modern designs be built for nuclear reactors. This instead of keeping open the old 30+yo designs which aren't as safe, like: Fukushima, Chernobyl, and Three Mile Island.
Let the old designs be properly mothballed and stored away safely. Shift to newer, safer models like Toshiba's pebble-bed reactor designs. Do more wind- and solar-power. Invest in researching battery technology that can replace gasoline. Invest in technology that will clean up our rubbish tips. At least things will be cleaner.
Don't come out with this hysteria about Global Warming, though. You sound like religious fanatics - nobody wants to listen to religious fanatics.
So I will stand by my original comments re climate change, carbon credits, etc: Global Warming my aching ass.
Posted by Black Poison Soul at 13:06

Email ThisBlogThis!Share to TwitterShare to FacebookShare to Pinterest
Labels: #scams