I know of a girl who dresses her son in pink and dresses. The reason: "I think he looks lovely in them" - yeah right, like he's not going to be gay or severely screwed in the head within ten years.

Girl is a fucking nutjob too. HB7+ type who is a nymphomaniac whore - quite a kinky one who does the more "extreme" types of sex. I'm talking Dungeon-style, her clients get off on torturing and hurting her. (Last I heard regarding her she was out of hospital with broken ribs from "coughing too much" - aka her last client paid her very well.)

As Copyleft commented over on Return of Kings:

A certain coincidence sticks out to me in stories like this... Every time someone defends "a boy's right to express himself and dress however he likes," they're not pointing to a kid sporting 100 rubber bands on his arm, or a kid who wants to dye his hair green and wear Martian antennae, or a kid who wants to dress as a zebra and gallop around everywhere...

Instead, it's always the boy wearing a dress, a tiara, or pink slippers who gets the applause. Always and everywhere, the crowd cheers for "gender norms" being defied... in one, specific direction only. Only feminization gets the headlines; only feminization is lionized; and only boys are being hailed for crossing the gender line.

Indeed hmmm, though he misses one simple realisation: women are already expected to defy gender norms. Which is why girls like this get the "you go girl!" chorus: 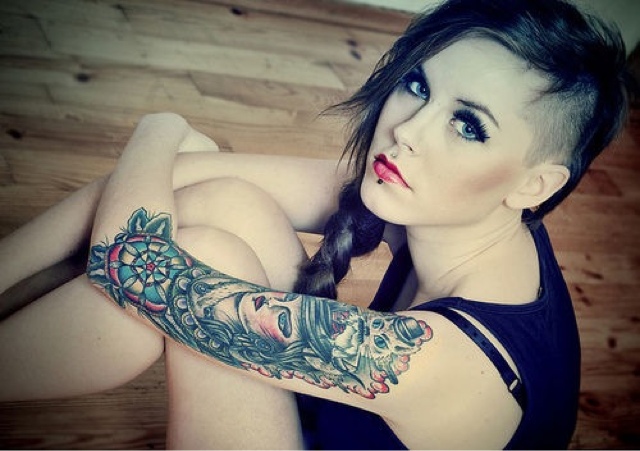 Probability of getting a high-flying executive's job with all that shit going for her? Fucking forget it, too "edgy". Screw that bullshit about her possibly being a super-competent combat-and-computer genius like that chick in "Girl With The Dragon Tattoo". She'll most likely be limited to working in a dive bar, I've seen it lots before. Or maybe become a nympho whore like the mom above.
She'll hate society for not letting her into high-flying jobs, too. Howls about "sexism" and "oppression" and "glass ceiling"! You betcha, its made from armoured glass and is reinforced with every piercing and tattoo and sexual/shitty attitude that you have on display for all to see.

Yeah, females already are outside the gender norm. Now they're applauding moms who do gender-bending on their own sons.

Might it be because that's one more unfit man out of the mating market? Or, if he does actually mate, it's in the Beta Bucks role - because he doesn't know how to be a man?

Women do have their cold-war in the sexual marketplace against each other. Is this extending to each other's children now? Or was that always true?
Hmmmm!
Enjoy the two-faced poison that women turn upon themselves and each other.
Posted by Black Poison Soul at 21:43