With time and experience, I seem to become more filled with cynicism. That's a code-word that translates to "jaded" in older times.

I strongly suspect that it's much the same process for the more hardcore MGTOW who go farther than the lone-wolf state and all the way to full-on ghost. They take it to a deeper, more extreme state than I do. Or am probably willing to do.

I do like some of the good things in life. Example: Grand Marnier. Also, having a steady job with plenty of personal time and leftover $$$$ to go do my own thing. Plus a home half-filled with antiques that I've restored - though I could give up that easily enough. Minimalism is coming easier and leaves more money in the pocket to go enjoy other things.

Strangely enough, teh wimminz are dropping off the radar for me. I can't be arsed with whores of any stripe. They're all "meh" and same-old same-old so far as I'm concerned.

Yes, in prior years I would fuck the occasional woman. Even have relationships as such. So long as she didn't screw up with me. When that happened, she became toast.

These days my tolerance is...

It's weird. In former times I have happily fucked the girls who've made it plain that they're interested aka asked me. (Complete fuglies and the fucked-in-the-head types aside, because we all need some standards, even if minimal. Plus, please remember, don't stick your dick in crazy. To me, in these days, they're all crazy.)

In the past six months I've turned down a couple of good-looking younger ones. Very good-looking. The types wanting to experiment with an older man. You know there's no real expectations there. Thinking back on it, one of them might have been actual jailbait. Though with 16yo's being legal it's harder to tell here in NZ - if someone is under 16 how are you going to know?

Don't even go close to there. Absolutely not worth it. Not even the Tinder wannabe whores that aren't prostitutes, who just want $50 bucks for a good time.

It seems that I've gotten to the point of having too much experience. I've become filled with cynicism, have become jaded.

I know how it'll end. It's always bad, and I'm always the bad guy. Plus there's a good chance of her getting pregnant - given I have the $$$$, I'll be on the hook for someone else's kid for 20+ years. "He's the daddy!" It happens all the time.

I have no interest in that end. Or anything close to resembling it.

I avoid it by avoiding the beginning.

Probably a good thing. I do have $$$$ - why hand it over to some young slag for a couple of 1-hour fun-time sessions?

"He's the daddy!" "Your honor, he has a vasectomy." "Your facts are irrelevant. You're the daddy. Pay up." Why even risk that?

For "young pussy"? Being the older man with a hot, younger girl riding his dick? Sheeesh...

I don't feel like dealing with the "he's the daddy" shit until I'm 72. Especially for a well-worn slag who's been stretching her cooch with a vibrating baseball-bat since puberty. Also probably had a train run on her nightly for a few weeks on end. Piss on that.

Yes, we have the local slag equivalent of Dubai Porta-Potties here in NZ. They just go up Auckland (or down Wellington) for their train-fest. In my younger years I occasionally had one over for a long-weekend, or a "holiday" week or two. These days they seem to want a minimum of 10 guys giving them a "deep exploratory" workout-and-stretch-fest.

As Popp and Blake would say: "Mooooore coooock!" What a world.

Once you step away from the social bullshit, there's a helluva lot of interesting things going on in it. There's some guys building a clock that will run for 10,000 years (google for "Clock of the Long Now"). Ten thousand fucking years. They're actually installing that thing now.

That's a lot more interesting from a "how the hell do you do that engineering-wise?" perspective than attempting to climb repeatedly into a modern slag's smelly and diseased and well-stretched hole. I want to go visit it (the clock, not the slag's hole) in a few years, once it's complete. (And the goddamn media-circus-furor has died down - I fucking hate crowds of people going "ooh" and "aah" - they're mindless sheep who get on my wick.)

Your particular mileage may vary.

Again, I find myself in a situation of not really having a whole lot of value to say. It feels like I've said it all, and I hate repeating myself too much. Six years of it. Color me bleakly (blackly?) surprised.

Perhaps something more will pop out, have to be expressed. I'm not sure.

Things like the meetoo and timesup crap haven't really pissed me off that much. Neither has idiots in education pulling a "we don't report them and turn them in because that will adversely affect their future and we never actually expected them to pull a gun and kill a bunch of people at school" idiot-fest. If you're not white, you can do a school-shooting as you wish. As for pizzagate, the overall silence is meh.

This stuff seems to be turning into a "what, you expected better? morons" mentality on my part.

What I am sure of is that I need to head over the states for a while. Probably with an RV for transport. Hell, that is luxury in comparison to carting around a bunch of stuff in a car for a couple weeks, and sluicing yourself off in the sea.

I'll get to see some beautiful bits of nature. Ones which haven't been shat on by all and sundry, like we are enthusiastically shitting into the social microclimate of our civilization.

The Crap Colored Glasses™ are still here. It's just that pretty-much everything seems the same. Nothing new under the sun.

Which I suppose is pretty-much because most people - especially most wimminz - are pretty-much the same now too. There's nothing new under the sun.

So I will leave you with this: 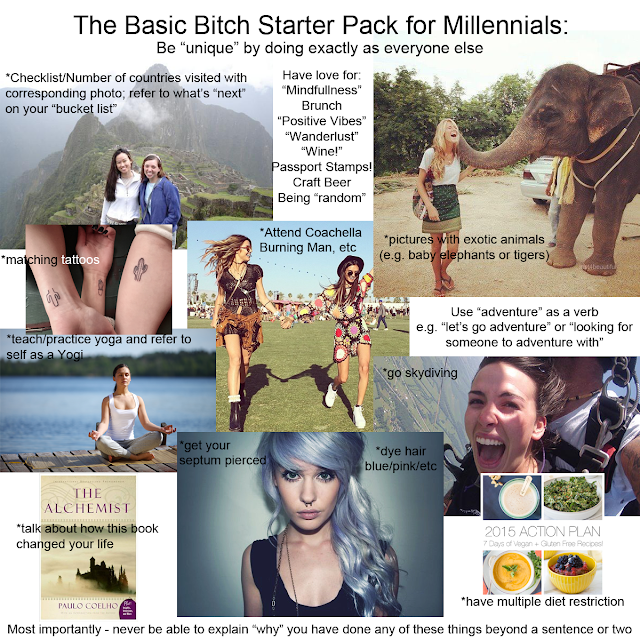 Because there is nothing original with any one of these skags these days. They're all the same. The only real difference is how well they hide their "quirks" aka fucked-up-ness.

I will go listen to the rain on the roof now, and begin planning my personal "adventure" - which I'm not going to bother telling most people about. Certainly not some wimminz. And certainly not in any form of depth.

They don't deserve it.
Posted by Black Poison Soul at 23:11