And the people bowed and prayed
To the Neon God they'd made
- Simon & Garfunkel, The Sound of Silence

Good riddance. Someone that whacked in the head, that reality-challenged, is not needed in this world.

So it seems as though the leftists sub-rosa enjoy rubbing the have-nots noses in the fact that they are have-nots, while at the same time self-abasing in such a manner that they appear to be apologising for their own existence and the existence of their ancestors who created and built up the society that they luxuriate in. In some weird, sick, and twisted mentality.

Enjoy your worship of the Neon God you have created. 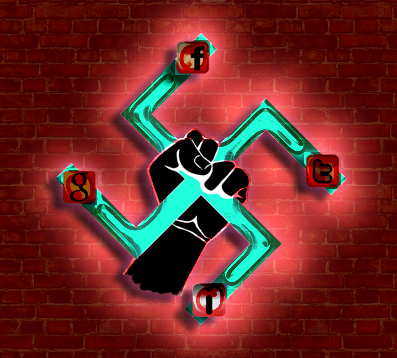 (And yes, I am aware that the Swastika was - for thousands upon thousands of years - a mystical symbol of good fortune and well-wishing. I've read that it was "discovered" independently by many civilizations, at least three, supposedly none of them with any contact. So of course the Nazi Party appropriated it for the use of their regime.

It is a pity that the Jews have rabidly and insanely vilified that symbol to all and sundry. But then their mentality seems to be: do anything to be the "poor, persecuted, victim". Just like the left and feminists and females on the whole.

A symbol that for thousands of years, perverted because it was used by some bad people for less than ten years. It's a strangely warped world that we live in.)
Posted by Black Poison Soul at 09:22