I'm getting fucking sick of this insanity.

I subscribe to New Scientist, which is basically a mag with basic shit going on in the scientific and theoretical fields. It's mostly pap for the masses, but wth, it generally has a few things in it which interest me. Plus out here in bum-fuck New Zealand, I take what I can get. Whatever catches my attention I'll go digging around for more info (the life of a minor autodidact).

Ooooohh shit. Here we go. Some leftist motherfuckers reasons why we should encourage more immigration. Guess I'd better read it.

Very quick into the mag:

While it mentions Paris and Brussels (no mention of Germany) it also states:


Terrorism and economic insecurity are genuine problems, but hostility to immigrants is precisely the wrong response to them. If you look at the evidence - and there is plenty to look at - it is clear that clamping down on immigration will not solve the problems that its opponents want to solve.

According to them, throwing out every single piece of shit leech refugee, plus building a wall, plus shooting everything outside that wall which tries to get in, plus carefully vetting and keeping a careful eye on everyone that you let through the wall - will do absolutely nothing to stop them shooting or blowing up innocent leftist/SJW citizens and raping their wives and daughters and running a child sex ring for 20 years. Damn, I never realised that.

Shit. I forgot. Profiling is WRONG. My apologies. I won't do that again. Vetting these motherfuckers in the slightest is totally out of the question.

What fucking world do these cunts live in? Immigrants bring in a poor mindset and different standards and criminal behavior. Hell, we have the Mafia and Tongs in New Zealand. That shit wasn't put up for franchise to the highest bidder, it came in with fucking immigrants. The fuckin' Pakistani's who set up the Rotheringham child sex ring hadn't had their families living in Britain for 100+ years while they soaked up good, British standards - they were fucking immigrants.

Excuse me while I wipe my ass with that little one-page article. Time to move on.
=========================
Radovan Karadzic (hint: the former Bosnian Serb leader) has been brought to justice through DNA work on victims, now he's starting a 40-year sentence. They've positively identified about 30,000 of the missing 40,000 from bodies, graves, etc etc. Let's have a look at ISIS for comparison:


A United Nations report highlighting the human rights violations of the Islamic State's jihadist campaign in Iraq found that while over 24,000 Iraqi civilians have been injured or killed by ISIS in the first eight months of 2014, and the extremists have taken up the practices of recruiting 12- and 13-year-old soldiers and forcing women and girls into sex slavery.

We already knew that, about the soldiers and sex slavery thing. Peculiar, is sex slavery for women and young girls endemic to that part of the world?


As of Aug. 30, the report finds that over 1.8 million Iraqi citizens have been displaced from their home due to the ongoing violence. The report notes that over a million citizens, or two-thirds of those displaced, are in areas that are under ISIS control, making it hard for humanitarian aid workers to access them.


The United Nations says Europe faces "an imminent humanitarian crisis, largely of it's own making".

Oh, I get it! Europe caused the fighting in Syria, the rise of ISIS, and suchlike! The UN is also censuring Australia for "sending boatloads of refugees to squalid camps in other countries". Wow. Just wow. Like, wow, man.

So reading through more...bla bla bla bla bla..."Concern about immigrants falls sharply when people are given even the most basic facts" - no, they just knuckle under when you browbeat them into submission with your emotive leftist crap. Oh, this is a goodie:


One analyst even says that removing all barriers to migration would be like finding trillion dollar bills on the sidewalk.

Reading on. "Globalization has lifted millions out of poverty" - because 10 cents an hour to them is big bucks. "Several populist parties took the opportunity to warn of a flood of freeloaders at the gates" - I'm reminded of an old Mad Magazine comic, where a guy comes to America to see the sights and a gullible American citizen starts pointing them out to him (it ends with the guy saying with a shit-eating grin: "No, no! You no understand! Where is welfare office?")

A little insert: "The origins of xenephobia". It states:


All the evidence suggests that migrants boost economic growth.


(In the past.) Anyone displaying different cultural markers was likely to be a competitor.

They got *that* right, which is why I wrote that post about racism and xenophobia being good. These things protect you and yours from the kind of shitbags who blow up innocent SJW/leftist civilians and get your underage daughters addicted to drugs in a sex slave ring.

On second thought. Maybe they're right. Maybe that racism and xenophobia is really a bad thing. Maybe we should actually embrace these diverse people and every nuance of thought that they bring to the table. Perhaps turning our women and children into sex-slaves isn't a bad thing after all.


In a survey of 15 European countries, the UN's International Labour Organization (ILO) found that for every 1% increase in a country's population caused by immigration, it's GDP grew between 1.25-1.5%.

Study and controls, please. In comparison to what? What if the 15 countries had not had such immigration - would the GDP growth have been smaller? The same? Larger? Where's your statistical comparison?


The World Bank estimates that if immigrants increased the workforces of wealthy countries by 3%, that would boost world GDP by $356 billion by 2025.

Again, in comparison to what? Define wealthy countries? How about some hard numbers on exactly the amounts of people involved? Was there a rise in crime with these immigrants?


Removing all barriers to migration could have a massive effect.

What, to jobs as a suicide-bomber? It's only short-term employment, ya know...hardly high-paying and skilled work... 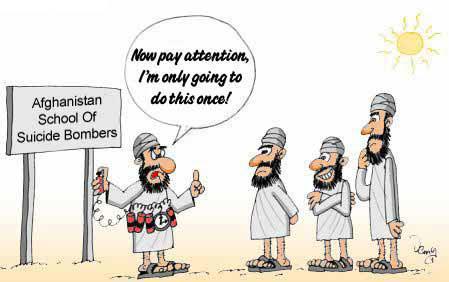 A meta-analysis of several independent mathematical models suggests it would increase world GDP by between 50-150%. "There appear to be trillion-dollar bills on the sidewalk."

Oh, totally! By the way, did you take out the GDP contributed by all the scientists and high-end engineers and those who really get shit done? After all, they will get blown up by the suicide-bombers or killed off by ISIS as undesirables - the remainder will also get taxed massively to help the "poor, innocent refugee's" to get started in their newfound home.

In the end, I suspect that the 70 virgins these retards get will be like this... 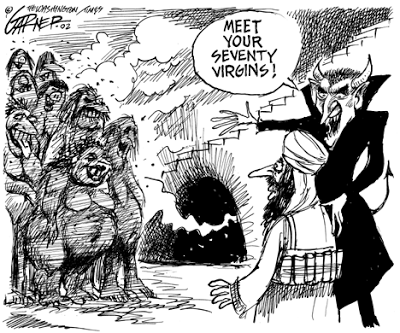 ...or their fellow (male) suicide-bombers.

I get the impression that you could kill one of these morons every minute, and they'd still increase their numbers faster'n you could kill them. Maybe we need a "Hunt an SJW" and "Hunt a Leftist" season.

Time to go have a sip of grand marnier, then bed. No, I will not bother buying New Scientist any more. They are nothing more than another leftist sounding-board. The signal-to-noise ratio is too pathetic for it to be worth the money.
Posted by Black Poison Soul at 22:38