An Unhappy Picture of Damaged Goods

A little while back, Uncle Bob put up a post about 80% of women being unattractive. Almost as an afterthought, he put out this:


It's astonishing the number of women out there who are damaged goods.


I would put at 95% of women out there are damaged goods.

Conversely, I would have to state that probably 95% of men out there are damaged goods also. (Including myself, when I'm feeling brutally honest. Or bleak.)


Define "damaged." I think the meaning is different for each sex. They become damaged differently, in different ways.

What does it mean to be a "damaged" woman?

What does it mean to be a "damaged" man?

How does each get that way?

Now these are good questions. I've been thinking about this for a couple days and here's my take.

What does it mean to be a damaged woman? How does she get that way? To me, the primary thing which makes a woman damaged is that she is out of touch with reality. To achieve this requires that she be coddled, protected, and spoiled all of her life. This leaves her delusional, narcissistic, and selfish in just about every way.

She acts in ways that no man can, because special allowances are made of her simply because she is a woman. She is protected from the natural consequences of such behavior. She is privileged in this manner - so privileged in fact that she actually has the chutzpah to claim that she is oppressed - and others will support her in this delusional claim.

Her privilege is such that in many cases if something - almost anything - doesn't go the way that she wants it to, she will have a screaming fit. And everyone will gather around to console and support her with her spoiled behavior.

What does it mean to be a damaged man? How does he get that way? To me, the primary thing which makes a man damaged is that he starts out in life being out of touch with reality - then has his eyes opened to it, with varying degrees of brutality. To achieve this requires that he be lied to all his formative years (men are scum, woman are sweethearts, always kowtow to women, etc etc). This leaves him delusional, with an imposed inferiority complex in almost every way (especially these days).

He acts in very strict and narrowly-defined ways because if he doesn't, he gets mentally and emotionally beaten around. Even physically - which he is not permitted to defend himself against (the best defense is a good offense) - upon threat of jail and having his life ruined forever. He is expected to follow a set path which forces him to do certain things, typically in the service of women and children.

The wakeup can be gradual and gentle, or sudden and brutal. The gradual and gentle types of wakeup would be typically what makes a man who is effectively a bachelor from a young age. He never gets married, has no interest in it, because he's looked at reality and realized that it doesn't match what he was taught. So he simply walks away from it, or uses it as it is (the "natural" PUA you might call him).

The sudden and brutal wakeup is generally because of women - often in the form of divorce, being cheated upon, being treated exceptionally badly. To the point where he cannot live in denial any more because life has brutally ripped off the protective mental blinders and rubbed his nose forcibly into the shit and then kicked him in the face, guts, and nuts a few times for good measure.

In my view there seem to be different ways of coping with this:


These are all forms of emotional/mental/social damage to a man. They come into existence because to be frank, men are an underclass. Nobody cares about the underclass, only the privileged, so we become damaged goods. More: because we are the underclass, we are blamed for the misfortune of becoming damaged goods. It is "our own fault" that this has happened to us, never mind the way that society is structured to almost force it upon us.

So someone (particularly the privileged class) might say "this isn't a rational reaction!" Actually it is. The underclass is stuck in what is effectively a police state. Some people might choose to commit suicide by pulling a gun and shooting everything in sight, which is widely reported in America (Bowling for Columbine, thank you Michael Moore for your weird-ass and leftist-biased documentaries).

Other rational reactions are knuckling under (denial), sabotage and guerrilla warfare (overreaction, MRA, PUA), and avoidance (MGTOW and Going Ghost).

I've been slowly turning this over in my mind and have decided to get into the maths of it, just to figure out the actual (or rather, most likely) percentages. So let's dig in, using New Zealand statistics. To recap:

49% of New Zealand children are born to single mommies

From Statistics NZ, on marriages and divorces in 2014:

That's the official statistics - I showed with American data that the reported rate over there is 53% minimum. And I've spoken with a divorce lawyer who told me that the divorce rate is actually higher in New Zealand, especially amongst the younger newly-married types.

So I'm going to run with these "official" statistics from New Zealand. I'm also going to make some probably-unwarranted assumptions, trying to be reasonable about them though. Let's use some of the information from this spreadsheet published by Stats NZ. Also some of the information from this interactive website by Stats NZ, showing an age pyramid of people in New Zealand.

From the spreadsheet, approximately 2.34 million women in NZ as of 2015: 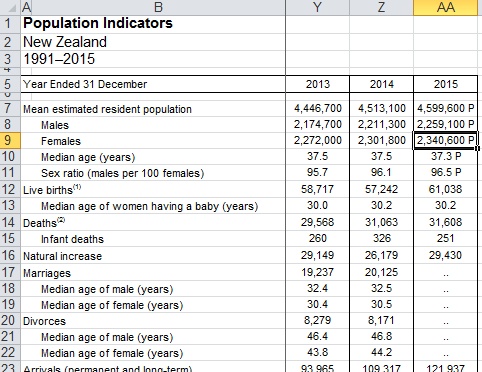 From the age pyramid, 2.33 million women in NZ as of 2015 (this is just a screensnap, go to the website if you want to play with the interactive). 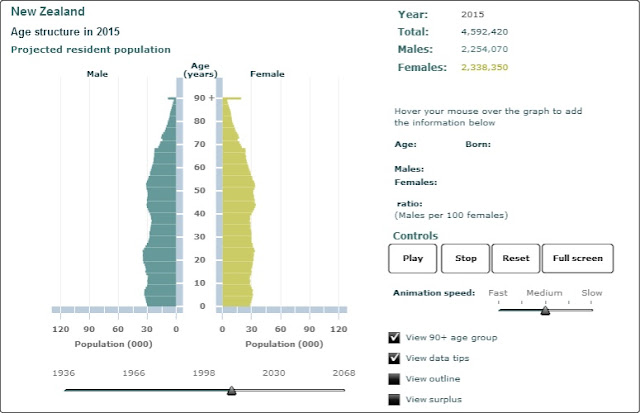 I'm going to state that single mommies probably have 1.5 children on average. If they have only one child that means that half of NZ women are single mommies, which seems excessive. Conversely, I can't turn around and say that they're all "welfare queens" with 3+ children each. So 1.5 is most likely a reasonable average/median.

I'm now going to state that only 50% of women (total) get married, period.

This leaves roughly 17% who actually don't get married and don't have children. It might be because they're unfuckable, unmarriageable, can't find a man because there are 3.5% less men than women available, or are flat-out sterile (which I showed back here 12% of women under 29 are sterile - though that doesn't mean that all unmarried women are sterile, or that all married women are fertile).

So to summarize. Some 33% of women are single mommies, 17% never go anywhere for various reasons, and 50% get hitched up to one or more man-slaves before they kark it.

With 50% of women getting married, that's 375,000 married women who have or potentially have kiddies.

With a divorce rate of 41% that's 153,750 men and women in their prime fertility years who have split up, causing damage to both parties and any children involved.

Of the remaining 59%, or 221,250 families, they're not all happy families. You can bet that at least half of them are staying together "for the children". So they fight, sometimes viciously, which is shit-knows not good for the children either. More damage done to everybody involved.

But lets get back to the percentages for the moment:

33% single mommies, damaged in some manner
17% unmarriageable for whatever reason or just never got it together enough to get married at all
50% got married, of which:

Let's split those three into the 50% of marriages, which breaks down to:

NOW we can combine these things:

Giving us an 85% overall of people (men and women) are damaged goods in some manner or another.

Leaving us with a 15% overall of people (men and women) who might be considered to be content, happy, and well-adjusted in life.

From up there, with a total NZ population of 4.59 million people, men/women/kids:

Given that birds of a feather flock together, the 85% of the fucked-up will most likely only find others in the same situation - while the remaining 15% are quite happy hanging out with others like them, don't need no other friends. Especially from the fucked-up group.

Which is generally why I state that 95% of people are damaged goods. Because that's all that I run across, yet I have to admit that logically not 100% of everybody in this country is fucked up. It's just that like hangs with like.

So yeah, I will admit that a helluva lot of this is just theoretical. It's kinda hard to get firm numbers on those staying together for the children's sake, or the exact number of guys who have knuckled under in their marriages, etc.

It's worse in America, with their proven 53+% divorce rate. Couple either of those with fucked-up kids these days not getting married at all (the 17% and possibly rising).

This is not a happy picture of our society.
Posted by Black Poison Soul at 08:58