Fear and Loathing in Modern Times

The modern day...everyone is scared shitless.

It is a symptom of our gynocentric society.

Teh Wimminz get the crap scared out of them at the thought of being socially irrelevant. So they thrash around, backstabbing each other, building themselves up while tearing others down, attempting to get their narcissistic "fix" from all and sundry.

Smile at a woman. Go on, give her a genuine smile outta the blue when she isn't expecting it. Maybe even a flirty little wink, too.

Unless she's having a shit day (or a completely shit life, with attendant mental craphole) - she'll smile back, maybe surprised, maybe a little shy.

You just validated her existence. For a moment, she is relevant.

It never lasts. In a short while, she will have forgotten - and be back into her usual mode of obsessing about her social status and worrying again about becoming socially irrelevant.

A never-ending cycle of shit, for her.

A lot of us men have the crap scared out of us too. For the same stupid shit. (I think we caught it off teh wimminz, like a dose of the clap.)

This is where we get the male trolls and White Knights and SJWs and leftists and femicunts and general attack-bunnies. These are socially irrelevant men who can't be arsed or are too stupid to figure out why (and then deciding if they actually want to improve) - they just make up their own mental frames of immature lemming-like behavior and follow them over the cliff: 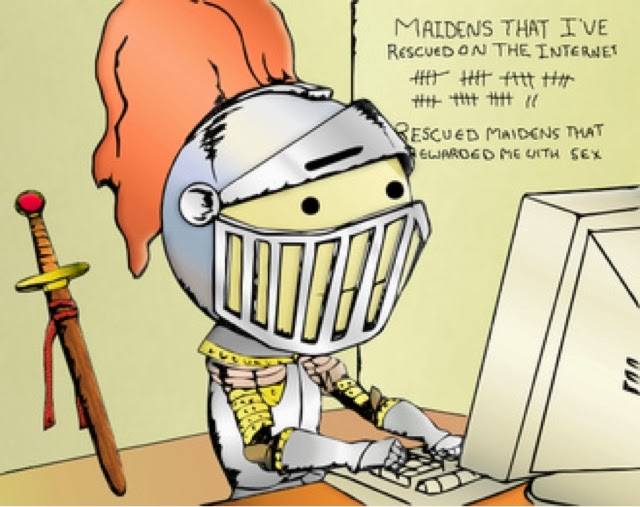 You can always tell an attack-bunny. They ask the most moronic of trick questions - in manosphere terms, Gamma's on the attack and attempting an AMOG: "So you think you're smart?"

Similarly, the real answer to the above attack-bunny gamma AMOG question is: "1 + 1 = 3, you smarmy little cunt. Now fuck off."

These attack-bunnies try to trap you via your ego into accepting an implicit challenge. Probably well-rehearsed and prepared. (A symptom of social irrelevance, preparing obsessively to make themselves seem socially relevant. The level of mental self-deceptive ju-jitsu required for this is enough to cause me migraines.) One where they know they'll make you look small. One which ends up with them gaining their validation. For a moment, they are relevant.

Like a woman's validation, it never lasts. Soon they're spinning around frantically again, looking for their next fix of social relevance aka narcissistic supply.

Is this about avoiding the tricksters? Avoiding the SJWs and attack-bunnies?

The real problem is our fucking ego's.

The real problem with our fucking ego's is that they've been deliberately built up. You too can have it all. Just go watch the series "Century of the Self" - and think about what propaganda, advertising, marketing is working on building up. Often in the form of making you seem more attractive to the opposite sex.

The ego. You can sell a shitload to someone with a big ego - because their big ego wants to flash it all around. "Look at me! I'm important!"

After their death - in a hundred years - in a thousand years - are they really going to be remembered?

Their ego cannot handle that. That utter irrelevance, the fact that nobody gives a flying shit, the fact that in a hundred or a thousand years it won't matter whether they were born - or not.

This is the roots of the modern bullshit drive for fame. Fame and relevance. The ego wants to be remembered, like Alexander and Cleopatra and Julius Caesar and Nero and Shakespeare and and andandand...

...never mind that these people actually did something. That's what made them famous. Their fame wasn't from "being famous" or "being socially relevant".

Be honest. Do we know of many "socially relevant" people from 300+ years ago?

Probably royalty and the aristocracy only. Kings, queens, princes, princesses, dukes, duchesses, barons, baronesses, sheriffs, etc. Precious few of those are household names. Think of a King, who comes to mind? For me, it's Henry VIII - because of that bloody song "I'm Henry the eighth I am" et-fucking-cetera. Anyway, these people actually did shit or had bad shit happen to them.

Take famous artists: Michelangelo, Van Gogh, Rubin, Picasso, Jackson Pollock, Salvador Dali. Did these guys become artists with the intention of becoming famous? Fuck no. They were just obsessed with painting and sculpting and doing stuff.

Even da Vinci was a fucking loser for much of his life - by the age of 30 he was basically unemployable. He didn't paint The Last Supper until 1498, when he was 46 years old. Sixteen more fucking years of obsessive crazy, as a pathetic has-been, before he put his first masterpiece out there. That is fucking obsessed to the nth power!

This is quite the quandary for the ordinary non-thinking young person who wants to be famous. Or even infamous, like Nero or Jack the Ripper or Charles Manson. Thirty-plus years of fucking shit before you get anywhere? MAYBE?!

The modern young pussies ego can't handle this. It's too big and dumb. It doesn't think in these terms. It thinks like: "I want it now. I want it yesterday. I want fucking more tomorrow. And the demands will all be changed then, so fucking stay awake!"

Because that's the way it's been trained, all its life. The ego. In a nutshell, it wants to be Mister Fucking Popularity - NOW.

Tony fucking Robbins, unleashing the power within. "Visualize yourself in an auditorium. All your family and friends come wandering in. They start a eulogy...it's yours. You're dead. What do you want them to say about you?"

Yeah, supercharging that fuckin' little frantic rabbit of an ego of yours. So selfish. So ultimately pointless and futile, wanting to be "remembered" in such-and-so a way. A fuckin' trap that others can use to grab you by. Grab the balls, squeeze a little, drag you around, thank you very much that'll be $100, NEXT!

Cautionary stories. MacBeth - a warning that ambition is a vice, not a virtue. Another trap of the ego. Taken advantage of by the corporate ladder. As per The Peter Principle - eventually you get promoted to the point of incompetence. It's a mindless escalation from competence and relevance to incompetence and irrelevance. With a slow death of the self resulting.

Running endlessly to fill our ego, in a job that is 90% stupid, in a society that we recognize on a deep level is existential hell.

In a thousand years, in ten thousand years - all futile, at the end. Nobody will remember, let alone say "this person mattered because of X".
Posted by Black Poison Soul at 00:45