Hold tight, this is gonna be harsh. Feminists, rejoice in your screwing-up and screwing-over of your own sisters. And the next generation of kiddies too. As a minimum.

So here, I am going to dig into the Child Poverty Monitor for New Zealand (note that the website says 2015, but it's actually based on 2012 statistics - it's supposed to be updated every 5 years). Here is the opening graphics from that page: 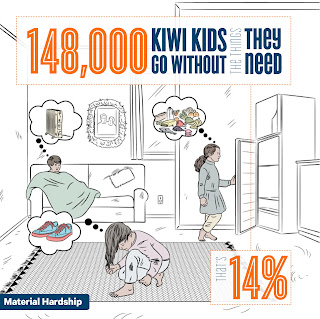 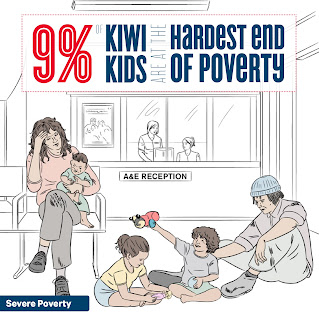 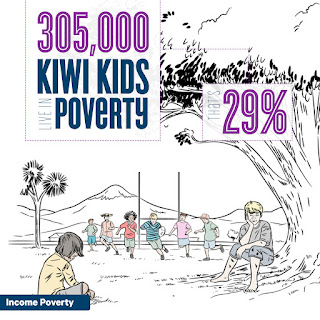 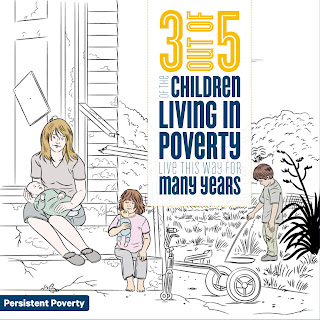 I will say, I find these pictures hard to take - 'cause I'm a really soft-hearted bastard when it comes to kids, grouchy and mean-spirited as I might come across here. You'd probably expect me to make nasty comments about if they're better boiled, roasted, or fried.

Have to admire the marketing and artistry that went into those images. Especially the kid with the Buzzy Bee - brings back memories of the one that my brother and I shared as a kid. Very well-designed to tug the heartstrings. You will note that the only male father-type shown isn't the type of man who wears a suit.

Now to give these numbers a cold, hard look:

Which adds up to: 52% of New Zealand children living in conditions of poverty. Of course, they may be misrepresenting the numbers - however, material hardship/income poverty/severe poverty I will assume to be completely separate poverty brackets. So I can with reasonable confidence add them together to get total poverty percentages.

Here's another nasty statistic. In New Zealand, 49% of children are born to single mothers (according to the NZ Government's own statistics).

They are making a major life-changing decision in such a wishy-washy, lackadaisical manner that it screws up their life for the next 20-odd years.

That's the prime years of their life, too. When they are young, when they should be alive and filled with joy and happiness. When they should be part of a well-knit and loving family, community, helping to bring up strong and wholesome children to be proud of in their later years.

Instead they're stuck with doing their best to make ends meet - even with the help of das guberment and it's confiscatory taxes, plus stealing money from the pocket of the putative father.

I'm not saying that these women are dumb. Far from it. Some of them are quite smart chicks. Unfortunately when someone with a 161 IQ turns around and becomes a single mommy ("it just happened!" - fucktard) I simply have to shake my bloody head at them. What organ were you thinking with, girl?

* Many children don't go to the doctor when sick because they can't afford the appointment costs and medicine - semi-bullshit. Children under 6yo have no (zero) fees. Recently this has been extended to children under 13yo. That's an improvement, which is what the site is supposed to be set up to track anyway.

* Staying home from school because they don't have a lunch to take - semi-bullshit. I see, very often, very fat women (I'm talking Beluga fuckin' Whale size) with skinny children. There's food there. It just ain't goin' in the right mouth. The government also provides free breakfast since 2013, in the form of milk and weetbix.

* Doing badly at school, not getting a good job, having poor health, falling into a life of crime - I will say "yes" to that. All of these are contributed to by poverty. Been known for yonks.

* Digging further in, the incidence of child poverty in 1984 was 15% and now it's 29% (how the hell that adds up to 52% of children currently living in poverty I'm not sure - but we'll run with it for now). So the incidence of poverty is rising. I would go along with that - the incidence of juvenile delinquency and crime and general stupidity is rising as well, probably somewhere along the same rate.

* Take part in our campaign and tell New Zealand #itsnotchoice - BULLSHIT! It's not the child's choice, but it sure as shit was the momma's! He was good enough to part her legs for. He's not good enough to be her husband and help bring up children. He's making enough that it's worth stinging him for child-support for the next 15 years. She can fill her fat belly but not her kiddies.
==============================

It's interesting to me to note that the rise in child poverty seems to rise with the incidence of numbers of single mommies:

You can add to that the results of the 53% divorce-rate that I touch on here. The kiddies from these divorces most likely end up in the poverty-bracket also. They certainly end up in the "troubled" section of society.

Riddle me this: In what fucked-up society is a businessman who makes $150k a year - who certainly never beat the shit out of his wife - suddenly hit with a divorce/frivorce - and is considered by all and sundry to be a loser and not worth spit?

Remind me again: Why we are paying for these mutilated beggars?
Posted by Black Poison Soul at 01:18