I bring excellent news for all teh wimminz and cuck-cucks out there, this time from the computer security division of life.

Or maybe through their partner's smartphone, as a variation on sex-fun-play.

According to Bleeping Computer, the security researchers did a wardriving test in San Francisco (they don't say if it was night or day) and found several people who were wearing theirs. Here was where they did the test (looks to be residential): 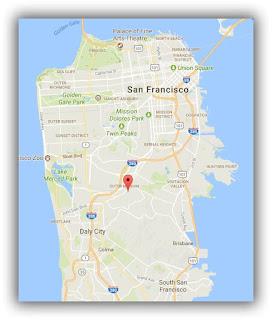 Given the inherent insecurity of these things, I can imagine the practical joke of the future. At work, triangulate in and find one of your more sexualized female workmates with one of these...wait until she goes into a meeting...dial it up to eleven...watch the hilarity ensue...

A sex-toy party, where the female guests are expecting to be randomly stimulated by all and sundry at whim...

Hook some of these up to the internet for random people to "bid" on - highest bidder gets to stimulate the woman involved and watch her reaction via webcam...a variation on voyeurism...

You could probably make this into "the ultimate cuck" for the types who like a combination of public-sex and being cuckolded:

Her: "It was awesome, I got randomly stimulated fifteen times today!"

Meh. What next? Open fucking in the streets? And there's still one helluva lot lower that we can go, you betcha.

A humorous look at the weird sexual perversions of humanity - brought to you by Crap-Colored Glasses™, only $1k the pair and cheap at 10x the price.
Posted by Black Poison Soul at 09:07