Okay, so twatter allowed the meme #RapeMelania to trend, caught and put up on Breitbart: 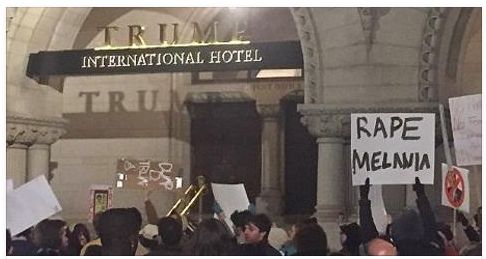 Now, if I'd gone out there with signs saying "Rape Michelle Obama and Hillary Clinton" I'd have been lynched.

Yet twatter allows the entire meme to trend.

Yoko Ono apparently expressed her disappointment with Trump's win on twatter, sharing it with some 4+ million followers:
Personally I can't tell the difference between that caterwauling and her singing.

Plus all the compilations of leftists losing their fucking minds as Trump beat their supremely arrogant Most Holy Candidate Who Can Do No Wrong into humiliated submission. You can go search for those yourself. I have to admit, the schadenfreude has kinda worn off for me. Though I can still have a bit of a chuckle.

The rot, the diseased mindset, is far deeper than we knew.

Soberingly - these mentally and socially diseased people were the ones in charge of society until recently. They still are, until Trump and the Republicans actually come into power next year.

It looks like I'll still be having the occasional commentary to put up. There seems to be no end to the poison in society. There I was idiot enough to think that I could hang my hat up, chill, go do some serious travel and photography.

Boy, was I wrong. The job of exposing the insanity and poison and general nasty shit is never-ending.
Posted by Black Poison Soul at 18:54