The Divorce Grinder Is Real

Over on /r/MGTOW, another link to Statistics Brain which I originally used in my post about the Divorce Grinder that I put up several months ago.

One of the commentors states that this is wrong, bullshit, etc - and states that Statistics Brain doesn't cite it's sources, etc. (Which it does, it's just that the CDC hasn't yet posted out the September 2016 statistics that were used. Us ordinary peons don't get that info the moment it's been generated, it goes first to people who pay out the nose for it.)

Now, there's quite a lot of apparent relief in the post. Even the op is saying that he's glad he posted it, else he'd live with the misconception.

This is the basic data that I've dragged out of the CDC's website - I've chosen to use Page 16, the 2006-2010 statistics for all women (the stats are roughly the same as for men, a 1% difference). I've put a 0 in there as a beginning data-point, because hopefully you don't get divorced 3 seconds after marriage (and there's no 1-year percentage to start from):

Now, put it into an excel chart to show a rough trend of divorce over the 20 year period: 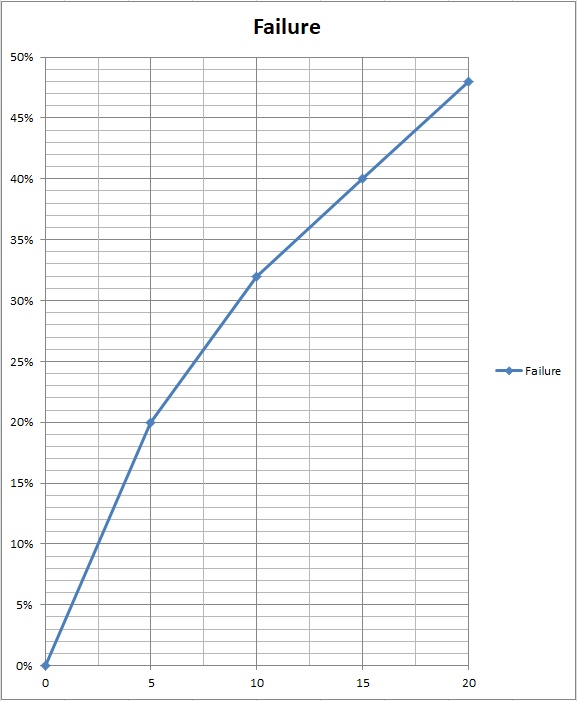 From this, I've done something that is not the greatest - I've had to dice things up to get a general percentage per year (ie 4% after 1 year, etc). Here's what it looks like when you start with a million marriages - remove a percentage the first year - then the next year, remove another percentage from the marriages that remain (because the other ones are already dust) - and keep doing it ad infinitum: 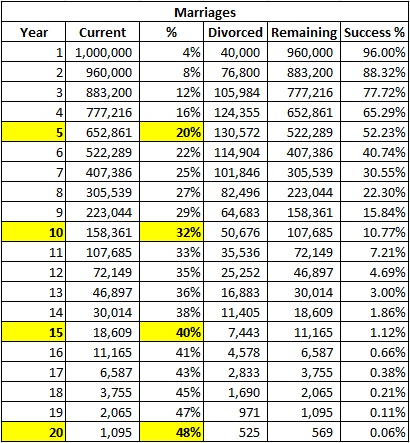 And from the 10-year line, there was a 10.8% chance of a marriage still existing after 10 years when using 2006-2010 data. Note the peak number of divorces at the 5-year mark, the numbers going down from there as the number of marriages remaining from Year-Zero dwindles.

When you throw in the data from the latest key-statistics it looks much worse and more like what the Statistics Brain people state: 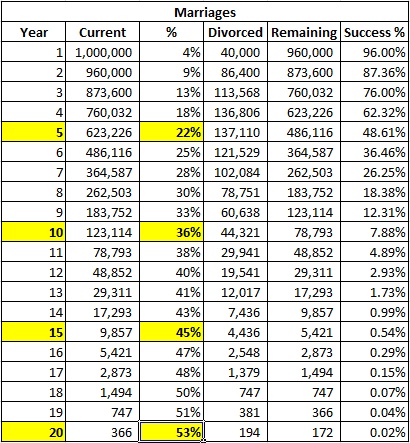 It's a bleak look through Crap-Colored Glasses™ today. Marriage and divorce is still a massive shit-sandwich of pain.
Posted by Black Poison Soul at 22:28